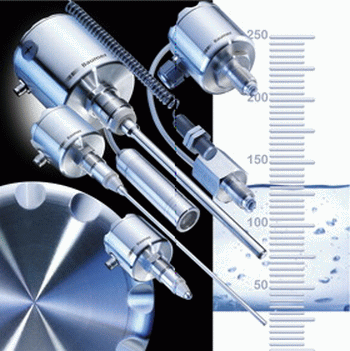 At Carlsberg brewery, the level in the tank at the filling machine has to be kept at a constant height. Sensors from Baumer are being utilised to ensure reliable and accurate results. In the bottling plant the beer is filled into 0.33 litre bottles and 0.33 or 0.5 litre cans on six machines.

Placed above each of them is a rotating barrel tank with a capacity of 300 litres from which the beer falls through the filling valves into the bottles. The bottle filler with 104 filling valves is able to fill 50,000 bottles per hour. The can filler follows the same principle but has 130 filling valves and consequently fills more cans. The production runs day and night in three shifts and is interrupted only for cleaning purposes.

In 2009, Carlsberg was looking for a new level measuring system for the barrel tanks above the filling machines because the existing capacitive system with older electronics reacted too sensitively in very humid surroundings which occasionally led to inaccurate measurements. This method generated a frequency output signal which first had to be translated by an integrated converter into a signal necessary for continuous measuring of levels. Furthermore, the system was difficult to maintain; spare parts were expensive and not readily available.

The main requirement for a new solution was high accuracy. As Carlsberg was already using Baumer sensors for pressure and temperature measuring in many other areas, the company’s continuous level measuring LSP 050 sensors were tested on one of the filling machines. The sensor detects the level of liquids with a fixed 300mm long measuring rod and converts it into a 4…20mA output signal.

“The direct conversion of the measurement is very important and has simplified the level measurement considerably compared to the previous solution,” explains Bent Pallesen, engineer at Carlsberg. “Moreover, with an accuracy of 0.5 per cent of the programmed full scale, the sensor achieves the required precision.”

The LSP 05x is able to precisely measure all homogeneous liquids with a minimum conductivity of 50µS/cm. Changes in conductivity through different media or temperatures do not affect the accuracy of the level measurement. Neither does the different concentration of media. Due to the fast response time of up to 10 ms (T66), the analogue output signal of the precise level measurement allows the control of very fast filling processes.

The level sensor can be installed in a container from above, below or from the side. Different process connections are available to ensure hygienic installation. All parts in direct contact with the media are made of PEEK thermoplastic and stainless steel according to DIN 1.4404 or resp. AISI 316L.

At a maximum pressure of 16 bar, the process temperature can rise up to 140°C for up to half an hour. A 3A-approval certifies that the device complies with the specific FDA and EHEDG requirements. If a measurement only requires part of the rod length, then push buttons in the measuring head allow programming of the span over any section of the rod, with the smallest selectable measuring range being 50mm.

Another crucial factor for use of the LSP in the beer bottling machine is that it can also be used in pressurised tanks. Beer is bottled under pressure to avoid foaming and loss of carbonic acid. The LSP reliably measures the actual level of the liquid because its potentiometric measuring system does not detect foam at all, ensuring that foam does not affect the result.

LSP sensors were mounted on top of the tank above the filler to measure the level at four points as it is constantly rotating and therefore the content is always moving.

The average value calculated from the individual measurements indicates the actual level very precisely. A PID (proportional integral derivative) controller takes the measurement of the LSP sensors and ensures that enough beer is constantly being refilled from the brew house in order to keep the tank level of the filling machines constant. This is necessary to guarantee a correct and complete filling of the bottles.

After the test run on the first machine, Carlsberg was very satisfied with the new level measurement and subsequently replaced the measuring devices in other filling machines with LSP sensors. The decision was facilitated by the convincing price-performance ratio since one LSP costs a quarter of what Carlsberg would have had to pay for the replacement of a defective probe of the old system.

“We have found a low-priced solution that provides a reliable measuring result and is easy to install and maintain,” says Pallesen. “Only the process connection had to be adapted slightly. For that, we modified the adapter on top of the tank in order to enable a direct installation of the LSP.”

For the level sensor in the can filler an improvement is planned since the high humidity and heat could cause a problem for the measurement: an additional protective housing surrounding the LSP will shield the sensor from heat and moisture to keep the measuring accuracy stable in the long term.