Discharging and the art of sausage making 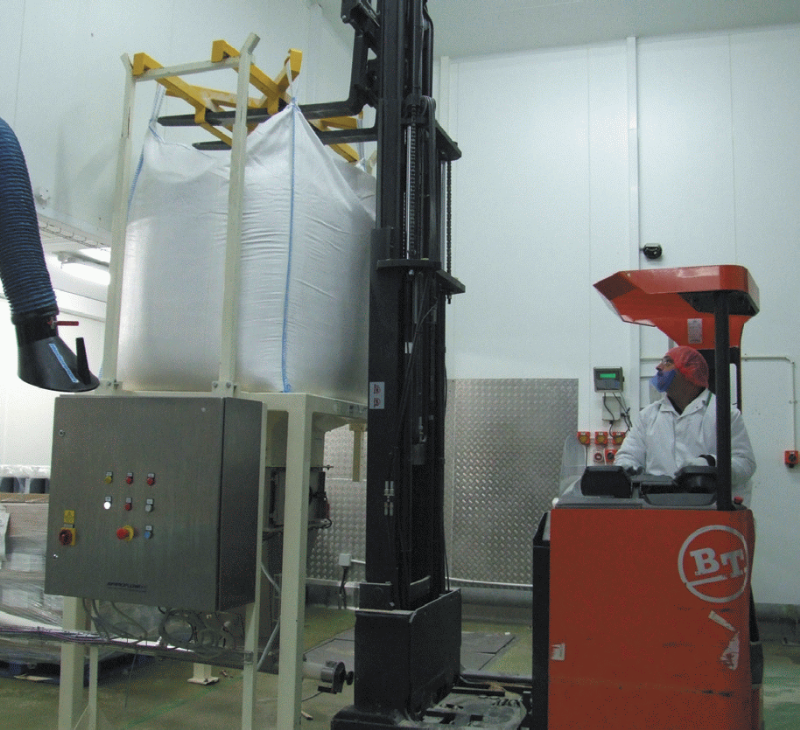 A Spiroflow bulk bag discharger and flexible screw conveyor system, installed at a recently extended sausage factory in the North West of England, is being used to discharge and convey rusk from the bulk materials/ingredients warehouse into the production area

When a UK sausage maker decided to relocate one of its manufacturing facilities from the South East of England to the North West, it chose to install a bulk bag discharger system from Spiroflow at the newly rebuilt, extended site. The company, who operates 19 sites throughout the UK, had to close the North West factory while demolition and building work took place. The factory is the newest sausage-making facility in the UK, and has been designed to take advantage of the latest technology to deliver high quality sausages.

At the South East factory, the customer had used a ‘Spiroflow’ bulk bag discharger with integral flexible screw conveyor to convey rusk from bulk bags, stored in the warehouse, through a wall to the high-hygiene production area. As the system had worked well, the group engineering manager decided to specify Spiroflow equipment for the same application at the North West site. Manufacturing in the North ramped up, whilst that in the South was ramped down – this meant a discharger system had to be bought to cater for the overlap. The existing discharger has been retained and kept in storage and will be used to increase production at the North West location in due course. 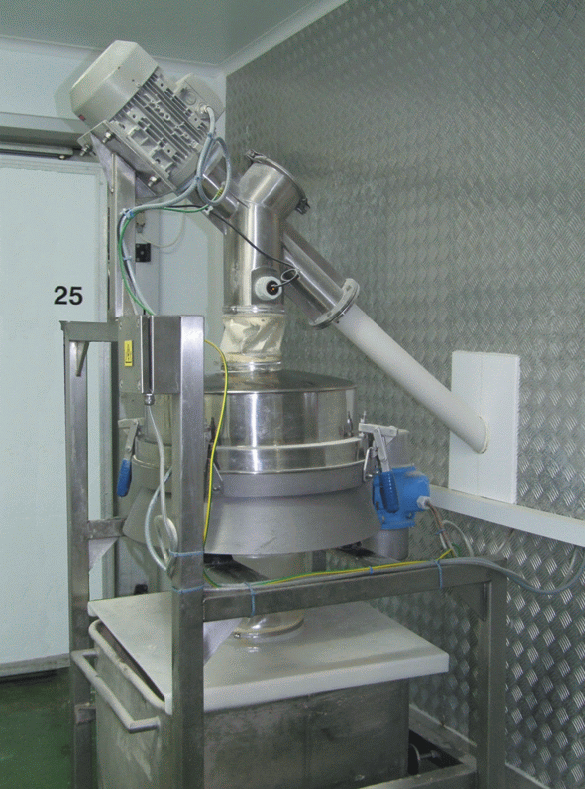 roflow’ bulk bag discharger in use at the sausage factory has stainless steel contact parts mounted in an epoxy coated carbon steel frame. The bulk bags are lifted into place by a forklift truck and suspended by way of a lifting frame that rests on spring-loaded support arms. As the contents of the bag are discharged, the support arms rise on their springs to keep the bag in tension. This ensures maximum discharge by preventing the bag collapsing into folds and hindering the flow of product from the bag into the collection hopper below.

The collection hopper is protected by a dust cabinet located between it and the bag support dish which takes the weight of the bag. Within the support dish the bags sits on an annular flexible membrane that allows the outlet spout of the bag to pass through. This membrane seals the bag to the discharger.

Untying of the bag outlet takes place within the dust cabinet. Access to the outlet spout is facilitated by an interlocked access door. The bulk bag discharger is furnished with pneumatically operated outlet spout pinch bars. Firstly, with the access door open, the operator pulls the neck of the bag down through the pinch bars. Then, with the door closed, the pinch bars are closed around the outlet spout. With the door re-opened, the operator can un-tie the outlet spout tapes. He then closes the door and opens the pinch bars. Thus, as rusk flows from the bag, any dust is contained within the dust cabinet. The cabinet is also connected to the factory’s central filtration system, so that any airborne particles are drawn away before the access door is opened to tie the bag off ready for removal when empty. 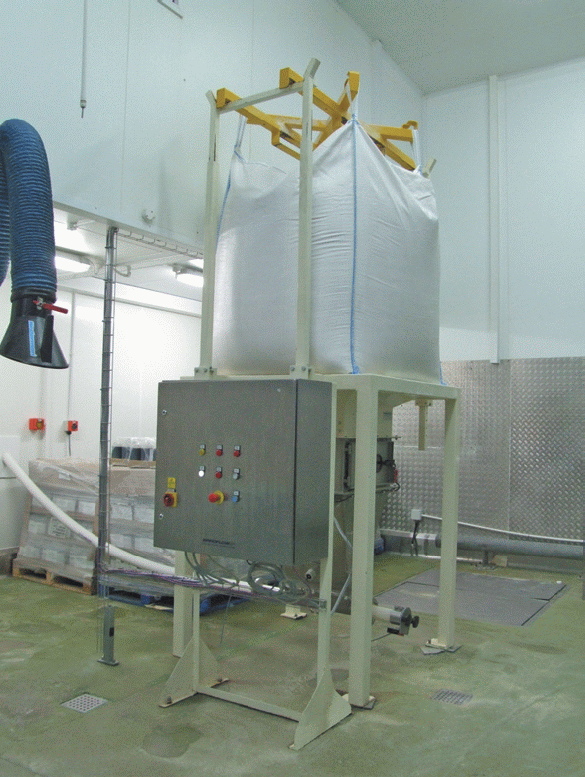 Discharged rusk is conveyed 3m  from the discharger, which is located in the bulk materials/ingredients warehouse, through a wall and into wheeled tubs in the production area. The accuracy of the flexible screw conveyors means that the rusk is volumetrically metered into the tubs using a timer. In the tubs the rusk is married up with other minor ingredients according to the recipe of sausage to be produced. Spiroflow supplied the support frame for the conveyor outlet, the flat deck sifter below, the control panel and printer that generates batch detail labels for every tub that is filled. The equipment was installed and commissioned by engineers from Spiroflow in March 2010.

The customer’s group engineering manager said: “We continue to be well pleased with the performance of our new Spiroflow Bulk Bag Discharger.”

At the North West factory, some 270 people produce up to 80 tonnes/week of fresh and frozen sausages. The factory includes an innovation centre and a training facility, where the art of sausage making is taught! The building has been designed with the environment in mind, and significant investment has been made in order to lower energy and water usage.