As the leading fruit syrup manufacturer in France, Teisseire has retained traditional core values; producing concentrated fruit syrups and drinks since the 1920’s. The main production plant in Crolles, built in 1971 has recently seen a major investment in new process equipment, thanks in part to Britvic that acquired the company in 2010. This project required Bürkert Fluid Control Systems, one of Europe’s leading process control technology providers to deploy one of the company’s latest innovations to aid process performance as well as integration. 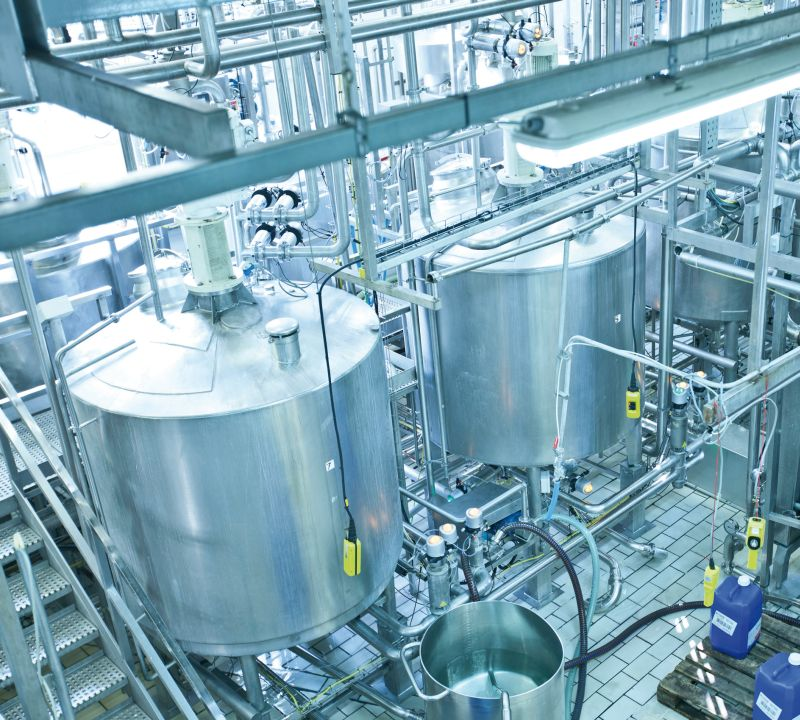 The Bürkert 8681 control head has been used as a key enabling technology to completely change how the process valves at the plant are controlled and actuated, doing away with direct air connections to control cabinets and creating intelligent fieldbus enabled devices that increase both the reliability and efficiency of the production line.

The project scope was to introduce a new fluid control system which would accommodate third party control valves but also provide fieldbus communications to improve the management of the production line. Another goal was to reduce the overall maintenance stores inventory, so using just one control head type (8681) would make a significant reduction in spares. 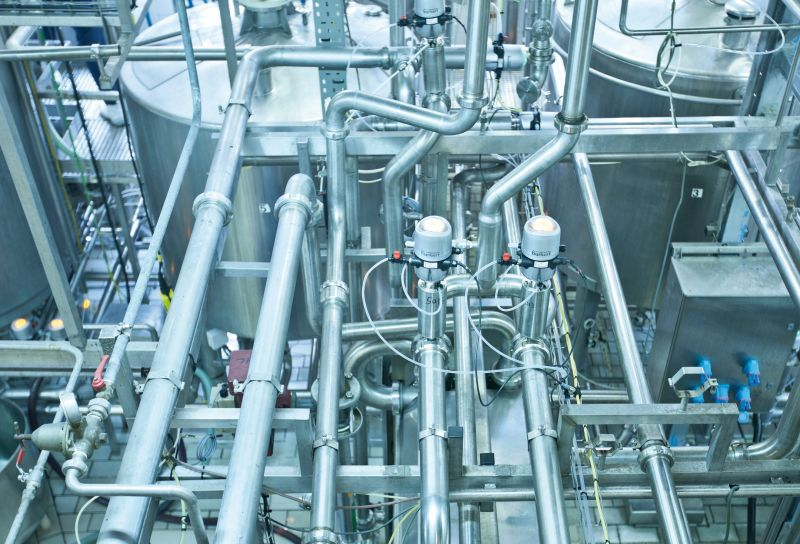 The production plant covers an area of 73,000m2 and produces between 300,000 and 550,000 litres of final product every day. The existing valve control system was approximately 15 years old and consisted of an assortment of different control heads, some manual, some automated, but the wide variety of components did not interact well together and overall performance was inefficient. One of the problems stemmed from the existing air supply which included oil mist from the compressor and was not suitable for control of hygienic valves, which had prevented any upgrade to a more modern control system in the past.

The project to refurbish the entire production line contained many aspects, including a new compressed air system as well as a renewed electrical supply system to include DC circuits. This work was to be carried out by other contractors, but its completion was critical to the workflow designed by Bürkert. With these improvements scheduled, the installation of the new valve control system could be finalised. 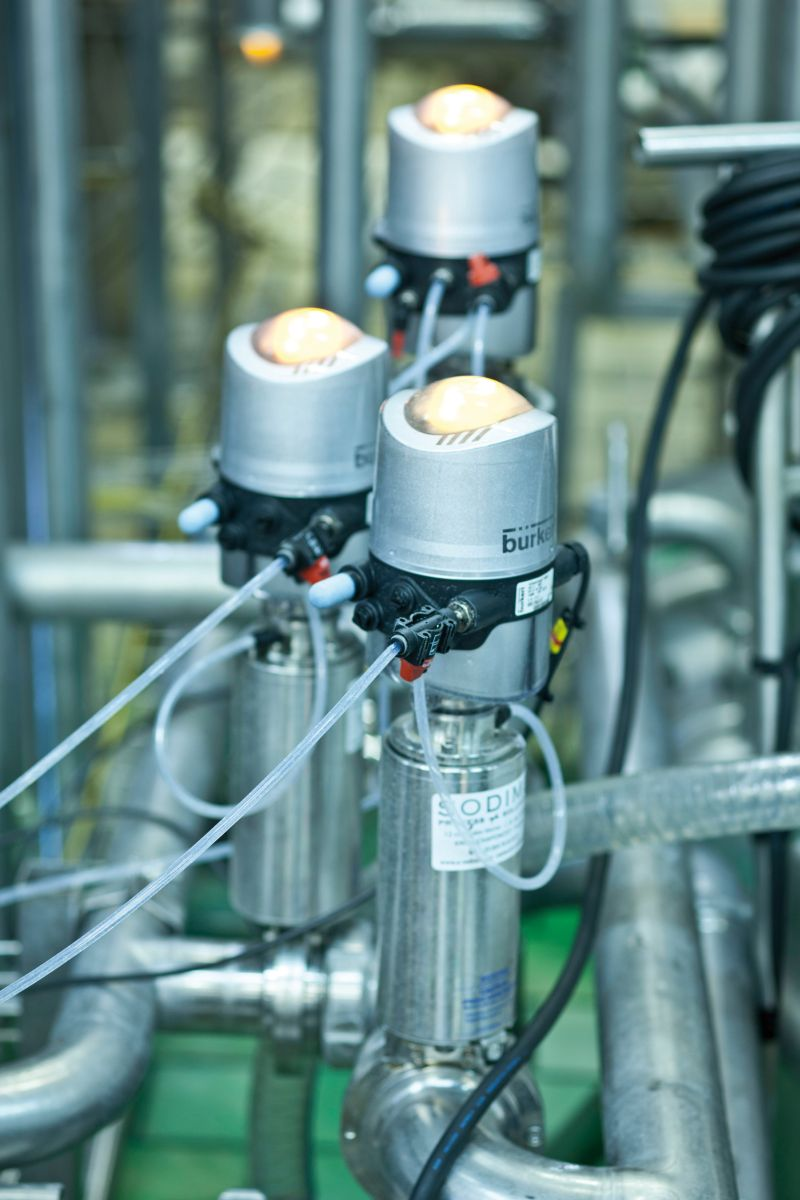 The on-site automation and electrical maintenance manager, M. Gonin, specified the Bürkert 8681 control head which is optimised for decentralised automation of hygienic process valves. With a decentralised automation concept, the control head takes over all pneumatic actuation, feedback and diagnostic functions up to and including fieldbus communication. The housing is easy to clean and features proven electrical IP protection and chemically resistant materials for use in hygienic processing in food, beverage and pharmaceutical industries.

Marc Klingler, Hygienic Segment Manager at Bürkert explains: “In the past we had been approached by Teisseire only for replacement components to keep the production line operational. However, once this project had been proposed, Teisseire was keen for us to design the new process control system, based on the 8681 control head.”

Work began on the project during the annual shutdown, which only lasted for three weeks, after which the production line had to be operational. The remainder of the work was completed by Bürkert over the subsequent two months, without causing any interruptions to the production line. By using the 8681 control head, with its universal adapter, it can be combined with all normal commercial butterfly valves, ball valves, single and double seated valves.

In addition to the main production controls, the plant also has a clean-in-place (CIP) system which was originally a manually controlled process. As part of the planned improvements, the CIP system was to be integrated into the fully automated control system, which would greatly reduce the overall time required by maintenance engineers to perform this operation.

Classic control systems, such as the legacy equipment here, using switch cabinets with valve terminals, an I/O system and field bus interface involve considerable expense especially in complex facilities. With this technology, the fittings at the field level are connected to the control units in the switch cabinets through a large number of long control air lines and discrete feedback connections. Apart from planning and installation requirements for such solutions, they are not entirely optimal as regards hygiene.

In shop floor practice, the control air lines can be quite long, which increases air consumption and has a negative effect on the switching times of the fittings. The situation is compounded by the high power requirement, such as for the evacuation of air from chambers and hoses – which is undesirable in terms of energy efficiency. The fact that the pilot valve operating level is at a distance from the fitting makes it even more difficult to commission, maintain and extend the plant. This also applies to the monitoring of processes.

The alternative is to use a control head, such as the 8681, which allows pneumatic control of the valve, but also provides manual activation, electrical feedback, visual status indicators, fieldbus communication as well as position sensors. This device only requires a power supply, air supply and fieldbus connection to be able to provide extremely efficient and reliable process control.

In comparison to the legacy system, the new, decentralised design of the process valves offers a number of advantages. By mounting the control heads directly onto the control valves, both the length and the total number of connections are reduced, making planning, installation and maintenance much simpler. With much shorter air lines, the switching times and overall air consumption are minimised, which enhances operational reliability.

The process valve switching positions are detected by an inductive, analogue position sensor and reported to the PLC system. Up to 3 switching points can be adjusted automatically by a Teach-In function. Additionally a fourth switching position can be read in and fed back via an external inductive proximity switch. The valves are easily setup using the ProcessTUNE function.

The 8681 control head is equipped with a coloured LED status display which signals the particular process valve switching position or indicates a diagnostic function such as maintenance required status or fault conditions. This provides a simple, easily identifiable indicator for the maintenance engineer, who can now spend more time dealing with issues elsewhere in the plant.

The unit as a whole eradicates any risk of external contamination thanks to a hygienic and aesthetically pleasing design. Maintenance is safe and facilitated by external magnetic activation, a system patented by Bürkert. The useful life of the system is increased by the inductive non-contact sensor, as well as by the IP67 protection rating, pressurisation and self-ventilation of the head.

M. Gonin, the automation and electrical maintenance manager for Teisseire: “We selected the Bürkert product as the best solution to improve our production process and the support we received from the commercial and technical teams has made the installation and commissioning of the new system very efficient.”

Marc Klingler again: “All the benefits delivered by the Bürkert package have resulted in a far more efficient use of resources such as maintenance engineer’s time, spares inventory and a far simpler electrical and pneumatic system. The process control system now works as a fully integrated package and provides far more control and functionality than was ever possible previously.”

Bürkert Fluid Control Systems is one of the leading manufacturers of control and measuring systems for fluids and gases. The products have a wide variety of applications and are used by breweries and laboratories as well as in medical engineering and space technology. The company employs over 2,200 people and has a comprehensive network of branches in 35 countries world-wide.