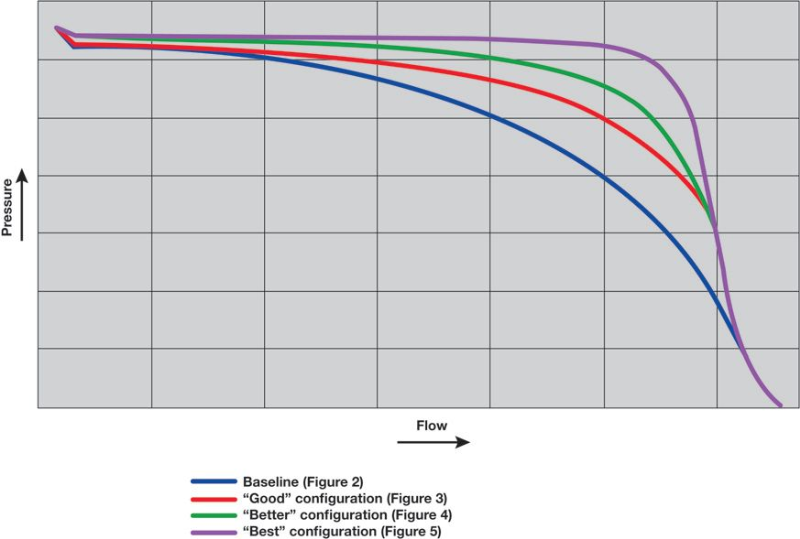 When an application calls for maintaining consistent downstream pressures at high flows, it will most likely require the use of a domeloaded pressure-reducing regulator. Even then, you may need to add external components to the regulator to achieve your desired performance. Your goal in doing so is to produce a reasonably flat flow curve for the regulator at a set pressure.

A flow curve for a pressure-reducing regulator illustrates the range of outlet pressures (vertical axis) the regulator will maintain based on various flow rates (horizontal axis) in a system. Ideally, you want to operate the regulator on the flattest – or most horizontal – part of a curve, which is where it will maintain relatively constant pressure even with changes in flow. 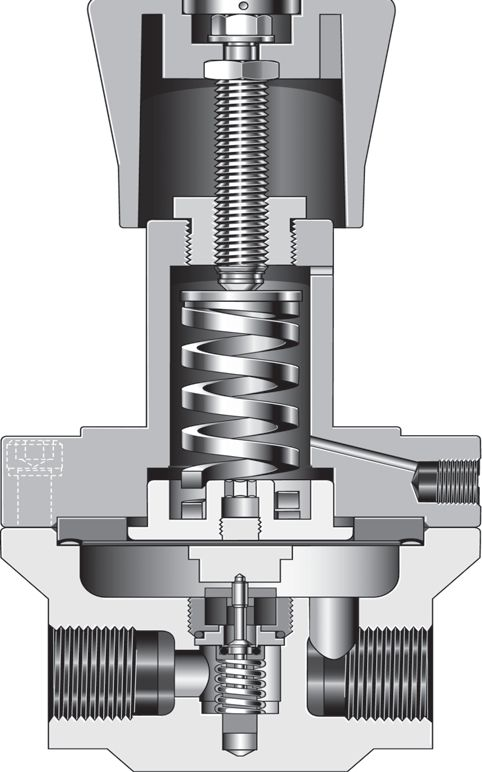 Unfortunately, every pressure-reducing regulator flow curve will experience some droop. Figure 1 represents four flow curves, and as you read each one from left to right, the downward slope in pressure is referred to as “droop.” On the far right of each curve, you can see where pressure drops steeply. The point from where the pressure begins to decline rapidly to where it approaches zero is called the choked-flow area. You want to avoid operating your regulator in this region because it will result in a relatively large pressure drop downstream. This is the region where your regulator is not efficient or effective. If your flow rates will take you into this region, you should consider a different or larger size regulator.

However, when operating a regulator in the functional portion of the curve (e.g., before the choked-flow area begins), you can reduce droop and achieve a flatter curve across a wider flow range by expanding the regulator’s capabilities. Using a springloaded regulator as a baseline (Figure 2), this article will explore the following system configurations:

2.            Employ an upstream pilot regulator and add downstream external feedback to the domeloaded regulator (Figure 4); or 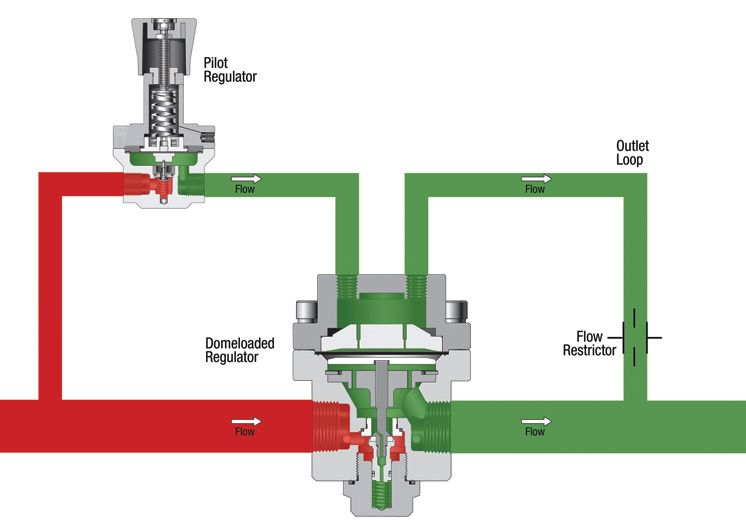 For this article, we’ll focus our attention on a facility that uses nitrogen from a single source for multiple processes. Assuming that the processes are not all in continuous operation, nitrogen flow demand will vary throughout the day. If the facility were to employ a springloaded regulator to control gas pressure, an increase in downstream flow would cause pressure drops, while a decrease in downstream flow would cause pressure spikes. Both pressure changes would require frequent manual adjustments to the regulator or additional point of use regulation. Instead, the facility will use a domeloaded regulator, which enables dynamic pressure control – without manual adjustments – to provide more consistent pressure as flow demands vary. 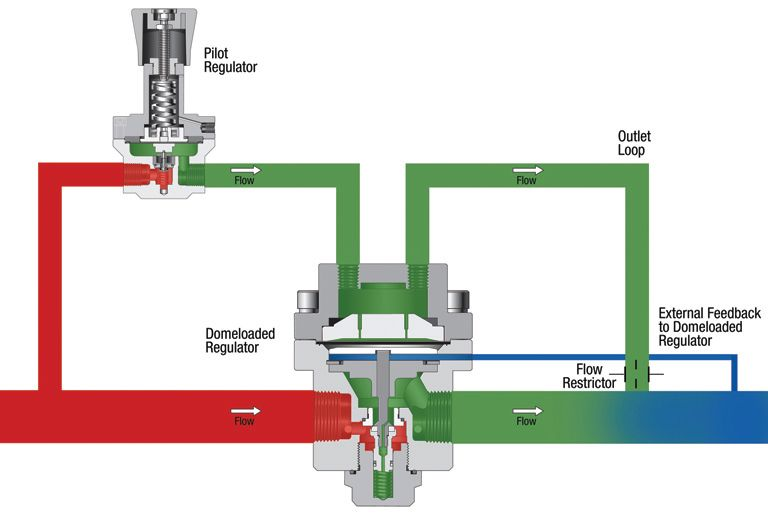 In a domeloaded regulator, a volume of pressurized gas in the regulator’s dome chamber replaces the role of the spring in a springloaded regulator. The dome chamber is pressurized at a level just above the required outlet pressure. This constant pressure creates a force on top of the diaphragm. If that force is higher than the force created by the outlet pressure, the poppet will open. As pressure equalizes, the downstream pressure will apply a force upward on the diaphragm to close the poppet. 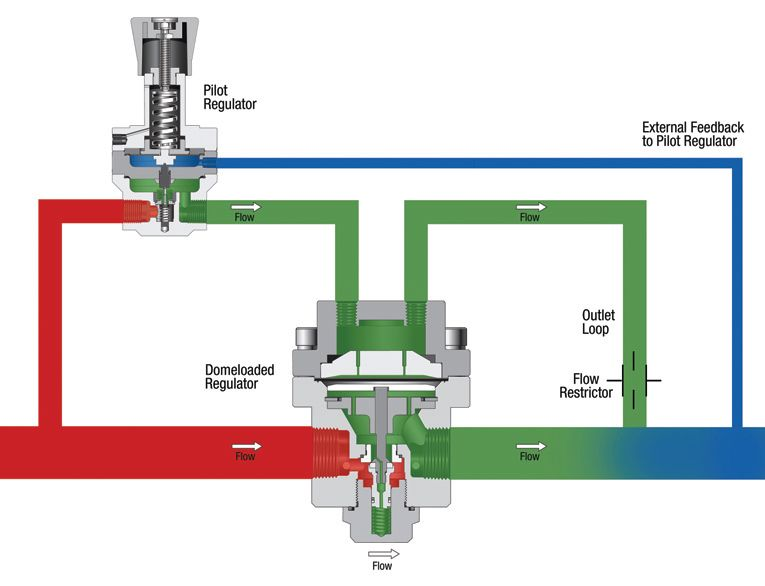 Adding various external components, and internal design changes, to the domeloaded regulator enables pressure on the dome to be adjusted dynamically to improve performance.

The second flow curve in Figure 1 shows the extended capabilities the domeloaded and pilot regulator configuration enables compared to the system using a springloaded regulator (curve 1). The set spring in a springloaded regulator loses force when it gets longer when pushing the poppet open. This causes the droop (drop in outlet pressure). With dynamic dome pressure control provided by the pilot regulator, the useable area of the flow curve is greater compared to the springloaded regulator. Depending on the specifics of the application, the “good” configuration will allow for use on systems with increased flow without worry of experiencing significant outlet pressure drops. But, we can do better.

Looking at the third flow curve in Figure 1, you’ll notice that the curve is flatter for this “better” configuration. Remember, we’re using the same domeloaded regulator, with modifications to the sensing area, set to the same outlet pressure for the second, third and fourth flow curves. In addition, you’ll see that the operating flow rate of the regulator has expanded before reaching a choked-flow state. However, we can still do better.

This system configuration creates a loop that enables constant, automatic adjustments to stabilize the system at the desired set pressure for optimum performance. The results are evident in the fourth flow curve in Figure 1, which is very flat – with almost no droop – over a broad flow range. This system will not experience choked flow until flow climbs even higher. The only way to produce an even flatter – almost perfectly flat – flow curve is to replace the manual pilot regulator in this configuration with an electronically-controlled pilot regulator.