By Dr. Conor McCaughey, Metallurgist at the Institute of Spring Technology

Within all industries, certain components are known for their precise manufacture and exceptional performance. Within the spring industry, valve springs are considered some of the top performers. These springs are typically manufactured from material with the tightest tolerances, highest strength and with minimal inclusions (super clean). The spring design is optimised in many ways compared to a typical parallel sided, constant pitch compression spring. Post-manufacture, these springs are typically exposed to some of the most advanced processes available in the spring industry. This includes dual peening, nitriding and hot pre-stressing, imparting beneficial properties, improving the performance and increasing the spring’s life. However, this does not make the spring immune to failure. In this article I will go through one of the rare instances where a precision engine valve spring failed prematurely; the question is why. With all the checks and improvements made to this design, the advanced material and process route, why are there still unexpected failures within this sub-sector of the industry?

The spring supplied to us was a valve spring for use in a high-performance combustion engine. Manufactured from super clean silicon chrome vanadium wire, the spring had also been exposed to variety of advanced post processing techniques (including dual shot peening) to improve the fatigue life and relaxation of the spring – a great example of an extremely high-performance spring. This spring design had been in service for years without any premature failures and with no new changes to the design or manufacture. Which again poses the question: why did this spring fail?

The failure occurred at a single point in the centre of the spring. Initial examination of the fracture face indicated that the spring failed from the inside coil position, the 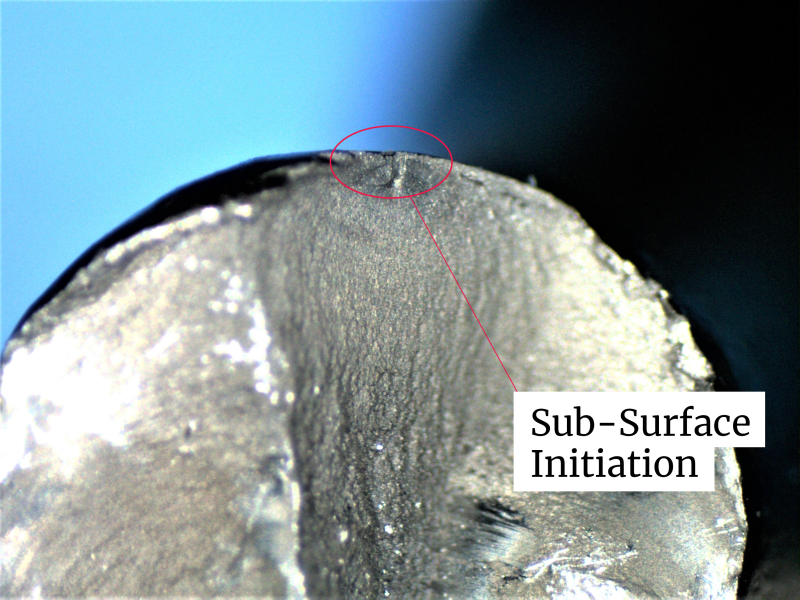 region of highest stress. However, there was no evidence of damage, defects or corrosion pits on the surface of the wire. Examination of the rest of the spring highlighted some areas of wear and damage, but nothing beyond what would be expected of a spring in service. Higher magnification images taken of the fracture face (Figure 1) indicated that the failure did not initiate from the surface of the wire but slightly below it. Emanating from this was a propagation region, indicating that the spring failed via fatigue. This was in keeping with the background information supplied. Although, it now seemed probable, even at this early stage, that the spring failed via fatigue from a sub-surface point close to the inside coil position, it was unclear what the root cause of failure was.

As per our standard failure analysis procedure, samples were taken from the spring, the microstructure observed, defects measured, and the hardness recorded. None of the results obtained shed light on why the spring had failed.  All the observations and measurements taken were within the limits expected of an alloy of this grade.

The breakthrough came when the fracture faces were imaged using a scanning electron microscope. Figure 2 shows the initiation region from one of the fracture faces. It clearly shows a small (roughly 30 µm across) indent at the centre of the propagation region close to the surface of the wire. This was exactly where the optical images indicated the initiation would be. A similar indent was seen on the other fracture face. This led to the conclusion that the spring failed via fatigue, initiated at an inclusion. 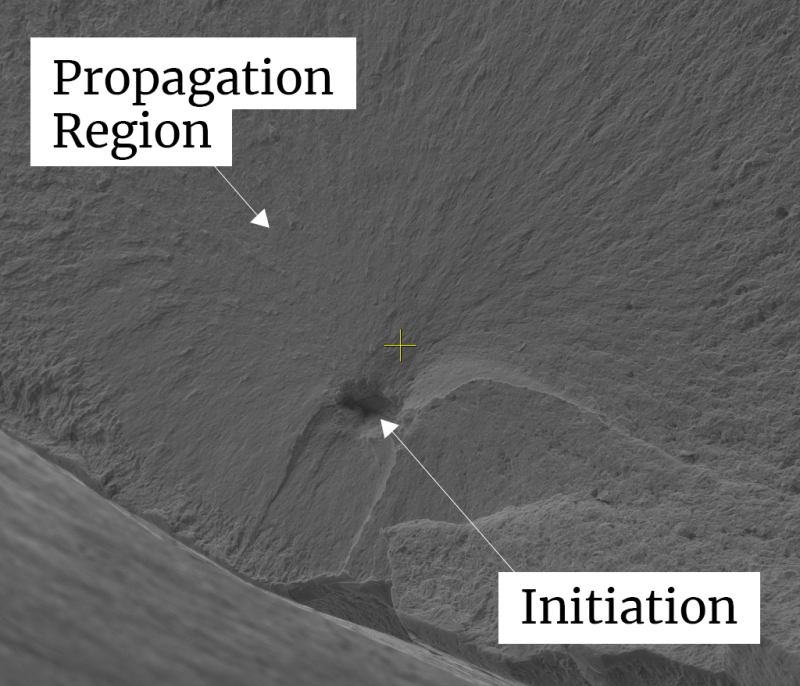 This might seem clear cut and uninteresting, but the spring had been manufactured from super clean material. How could an inclusion have caused failure? The answer is, as good as wire manufacturing is, and as clean as the material is, it is impossible to remove all inclusions. It is even stated on most, if not all, super clean material that an occasional inclusion will be present in the material in excess of 30 µm. This might be well known in the spring and wire industries, but it doesn’t seem to be as widely known by end users.

However, what is particularly unfortunate is not only that the inclusion was present, but its location. It is known that the highest stresses in a compression spring are located on the surface of the wire at the inside coil position. If this inclusion had been present on the surface it would have either been detected by the wire manufacturer or removed during the peening process. However, it was subsurface (and yet close enough to the surface to be in a position of high stress), remained undetected and was in a region where crack initiation was likely.

This should not dissuade anyone from shot peening springs. In the vast majority of springs, peening will increase the fatigue life. It is only in a tiny proportion of cases where an inclusion is present in just the wrong area that this will become a catastrophic problem. As I said at the start, this spring design had been used for years without any previous failures. It was just unlucky that an inclusion of this size, very rare in this grade of wire in the first place, was present at this location.

This shows the value of super clean material. As the surface quality of the wire gets better and better, you can end up in a situation where the spring will never fail from a surface defect, but initiations caused by subsurface inclusions or microstructural deflects. These can sometimes be smaller and way beneath the region discussed here affected by shot peening, at a relatively low stress, and cause failure after a huge number of cycles (hundreds of millions or even billions). Although this might be considered by most to be equivalent to infinite life it is not. Manufacturers and customers should use extreme caution when quoting “infinite life”. It is a term thrown round in engineering circles but is almost never the case, as even very small dynamic stresses can cause failure if given enough time.

How the manufacturing industry is futureproofing against pandemics