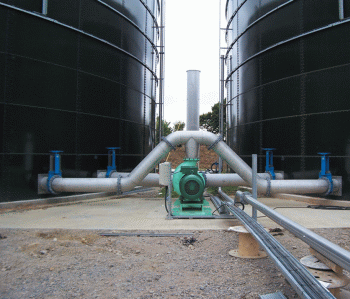 With increasing volumes of waste being processed to create biogas from the anaerobic digestion process, System Mix says it is important to ensure plant availability and working capacities are maintained. While it is acknowledged that the biogas industry has benefitted from the technological expertise gained from both the digestion of feed crops such as maize and to some extent from the UK waste water industry, problems are occurring with other types of waste material.

For example, the use of household waste material within the anaerobic digestion industry highlights the problems associated with inconsistent waste materials – even when they have been pre-conditioned and blended before entering the digestion process.

While the sludges associated with the waste water industry are usually well screened pre-digestion and energy crops such as maize which are uniform before and during the digestion process, it has been proven that heavier, fibrous materials in ‘waste-to-energy’ digestion processes create new problems. In many applications where submersible and paddle-type mixers have shown acceptable results where non-accumulating solids are the norm, there are other examples which indicate a direct relationship between poor mixing and gas production.

In addition to the more commonly accepted problems associated with poor mixing (reduced volatile solids reduction caused by less than ideal anaerobic conditions) other factors should also be considered.

These problems directly affect the digester performance in that they either reduce working capacity by settlement or strangle gas release by blanketing the surface of the digester. These problems, combined with solids that are prone to reweave or accumulate in clumps, cause specific problems with unsuitable mechanical plant inside the digester.

Failure to suitably condition simultaneously with mixing also creates problems with concentrated material leaving the digester either via a heat exchanger recirculation system or onward processing, such as dewatering prior to composting. Premature wear of heat exchanger recirculation pumps caused by grit deposition is also common where poor mixing at low level is prevalent.

Furthermore, transfer pumps can be prone to clogging and premature wear and unless suitable mixing systems are employed inside a post digestion storage tank it is likely that other problems could be encountered with settlement, dewatering or onward transfer to land.

While numerous types of mixing systems have been developed and implemented for use in anaerobic digestion processes, many have been subsequently discarded.

System Mix has become an established supplier of digester mixing systems, not only in municipal installations but also in the rapid growth area of bio waste industry.

A recent example is where Rotamix tank mixing systems were retrofitted as replacements for submersible and paddle mixers on two digesters at the Biogas Greenfinch waste plant at Twinwoods, Bedfordshire during 2010. During the preparation for the retrofit a very significant amount of settled solids were removed from the digester tanks which accounted for over 20% of the available working volume, after only four years in operation. The installation of a single externally mounted Vaughan Chopper Pump for each digester and an array of nozzles and pipework were installed quickly and easily.

Since being commissioned gas production has increased significantly and maintained its high level. Post digested sludge condition has shown that the benefits of simultaneous conditioning and mixing create a digestate that is more consistent and more acceptable for use in agriculture.

Installed at low cost, the Rotamix system features retained digester volume and minimal settlement, with over 90% being retained during its working life; maximised solids reduction; continuous recirculation during mixing to ensure full distribution and breakdown of solids, both mechanically and biologically.

Retained gas production is maintained to levels seen at system start without drop-off and the digester can be easily cleaned at minimal cost.