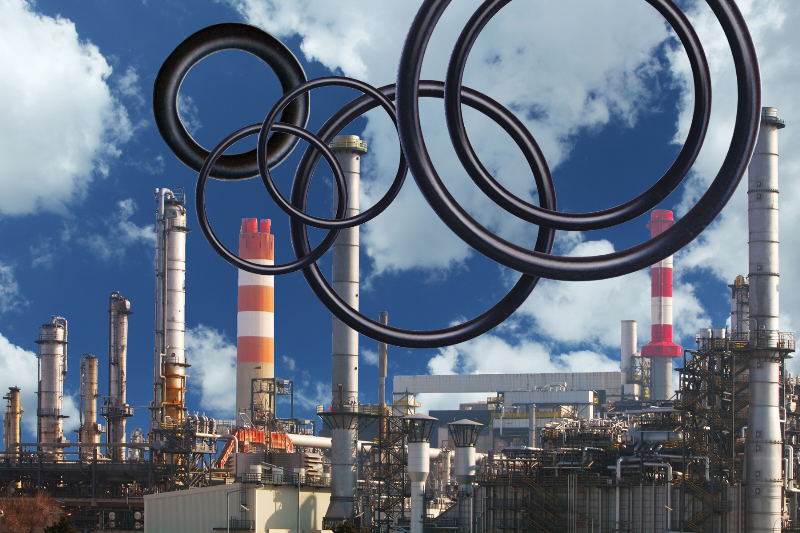 The performance and reliability of ‘O’ ring sealing systems within process plants can prove to be critical when examining overall plant costs. This becomes evident where the process fluids are aggressive, or otherwise dangerous to personnel safety, and environmental concerns become involved in the event of process fluid leakage due to seal failures. Conventional elastomer seals which have proved to last the lifetime of process equipment, or provide leak-free operation between programmed maintenance break-outs may have established their suitability. However, sealing products that exhibit regular failures, necessitating costly equipment stripdowns, loss of productivity, together with leakage and clean-up procedures should have the costs for the above procedures factored in when considering the overall costs of seal replacements. The DuPont Kalrez range of perfluoroelastomer seals, available in the UK from Dichtomatik, can show worthwhile long-term savings by extending the MTBF times and so minimising any associated labour and downtime losses.

It is important that the true cost of system failures include all the additional associated costs involved with equipment dismantling and re-assembly, downtime and loss of production. This should also include possible clean-up where aggressive chemicals are involved as well as the straightforward costs involved in replacing the sealing products (typically ‘O’ rings).

Case studies are available for examination  which include the use of dynamic ‘O’ rings of PTFE (Polytetra-fluoroethylene) for the production of biotechnology products including solvents, surfactants and concentrated herbicides at temperatures from 10°C to 45°C and pressures from 1.5 to 3.5 bar.Eff. An average seal lifetime of 1 working day, was extended to an equivalent lifetime of 2 months MTBF when the PTFE seals were replaced with Kalrez Spectrum 6375 perfluoroelastomer ‘O’ rings.

As well as this, fluoroelastomer (FEP/FKM) piston rod seals with a typical lifetime of 8 hours operation were extended to 8 – 12 months between replacements when high performance Kalrez parts were substituted.

In a further case study, shaft seals utilised in pumps for pharmaceutical, chemical and petrochemical processing applications, which also included handling concentrated sulphuric acid were also recorded. For safety reasons, seals were replaced at regular scheduled times, based upon the history of seal failures which occurred after a maximum service life of only two months. Following the replacement of the existing ‘O’ ring seals with Kalrez Spectrum 6375 products, no seal replacements or associated servicing costs were experienced over the following 20 months. Fitting the Kalrez products provided the necessary higher resistance level to chemicals, increased operating uptime and resulted in overall savings through the reduction of costly downtimes.

Case studies where cartridge type mechanical shaft seals are utilised within chemical processing plants also indicate that, overall plant savings can still be achieved by the introduction of Kalrez products to replace non-FFKM ‘O’ rings. Even when single mechanical seals incorporate up to 7 ‘O’ rings, with up to 20 production breakdowns per year, then an overall 4% savings per annum can still be achieved against the total system costs, which include all seal replacements with Kalrez products, plus downtime costs etc. Where 30 production breakdowns through seal failures occur, then the overall savings per annum increases to a healthy 27%.

Within the same plant environment, where single non-FFKM ‘O’ ring seals are incorporated in couplings, then replacements with Kalrez products can double the MTBF times from 1.5 years to 3 years without leakage. This can achieve overall system cost savings of 89%. These can even be increased to 98% savings where MTBF times are increased from 6 months to 3 years.

Kalrez perfluoroelastomer sealing parts have an established value-in-use including the ability to withstand 1800 chemicals, solvents and plasmas. ISO 3384 tests under harsh and aggressive conditions also indicate lengthier retention of sealing forces. Low compression set is also achieved with Kalrez Spectrum 7075 which recovers better under compression than many other perfluoroelastomers, so maintaining the shape under prolonged stress. Elasticity and recovery properties are high even after long-term exposure to temperatures up to 327°C.

Large seals are big on benefits

Controlling the pumps that control a huge slurry tank