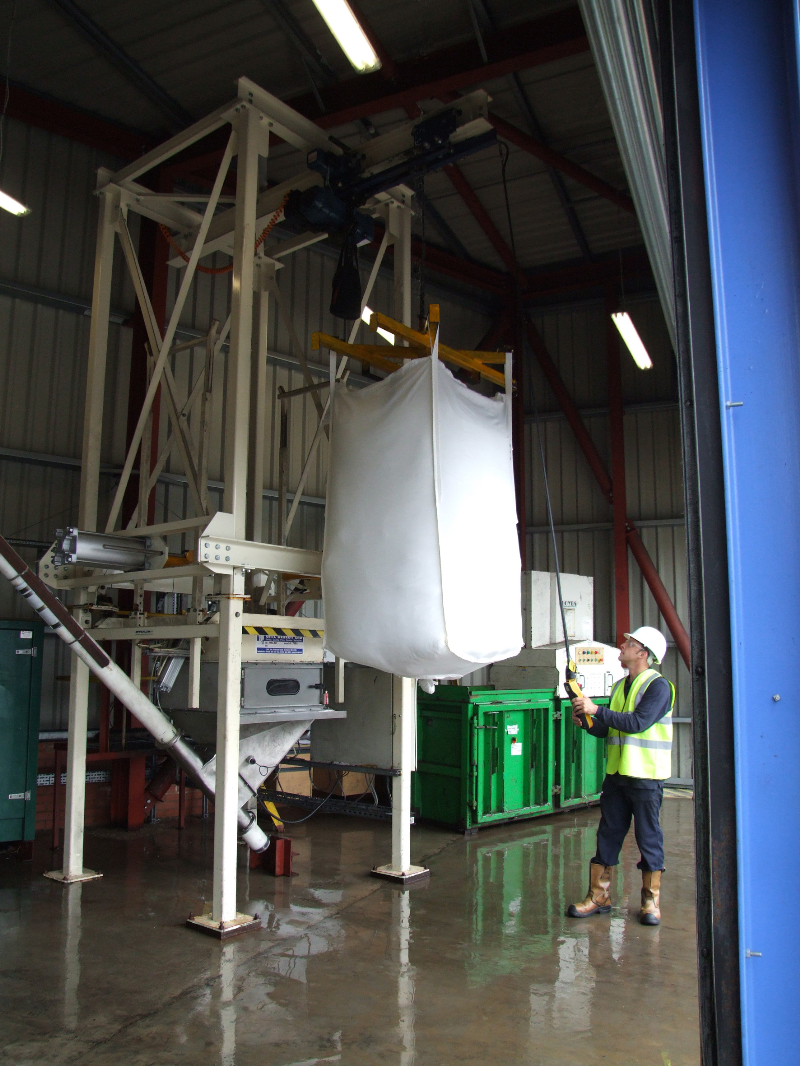 Back in 2008, Multisol Ltd of Irlam, Manchester invested in a new Aqueous Solutions Facility to manufacture a Urea solution, commonly referred to as ‘Adblue’. This is required by Euro 4 & 5 trucks with Selective Catalytic Reduction (SCR) equipment, to reduce NOx levels in exhaust gases..

‘Adblue’ is manufactured by the dissolution of Urea Prills into a pre-heated, high purity water source. The urea prills are delivered to Multisol in bulk bags – hence the need for an effective discharger system.  Once Multisol had won the contract to produce ‘Adblue’, they had to be in production within a couple of months.

Three potential bulk bag discharger manufacturers were identified. After evaluation, Spiroflow was identified as the preferred supplier; they were able to meet the required delivery and guarantee performance. Successful witnessed testing at Spiroflow’s Test Centre confirmed that the combination of a ‘Spiroflow’ Bulk Bag Discharger and Flexible Screw Conveyor was the correct choice to unload the Bulk Bags and deliver the Urea Prills to the inlet on top of the dissolver tank.

The ‘Spiroflow’ Bulk Bag Discharger  has an integral lifting hoist. 14 bags of Urea Prills are used per batch taking approximately ten minutes per bag to discharge. The Prills are then conveyed to the top of the dissolver tank by a 17 meter long ‘Spiroflow’ Flexible Screw Conveyor inclined at 45 degrees. The outlet of the conveyor has an integral slide valve and fan arrangement that prevents ingress of moisture into the conveyor from the warm water in the dissolving tank.

Richard Hands, Operations Director, confirms, “We are pleased with the performance of the ‘Spiroflow’ Bulk Bag Discharger and Flexible Screw Conveyor and, also, the after-sales support offered by Spiroflow.  As with all projects, during commissioning and initial start-up there are issues that arise, some more serious than others, and it is the response to these challenges that identifies if you have made a good decision with respect of your provider. Spiroflow worked alongside us to resolve any issues and handed over a fully capable system. It was this partnership which gave me confidence to sign a Maintenance Contract with Spiroflow to ensure that our equipment is always in good working order through preventative maintenance”.

The Bulk Bag Discharger is complete with side and base bag massagers to deal with agglomerated prills. In addition, bag spout clamps only allow product discharge after the containment doors are close to obviate exposure of operators to dust hazards. During the latter part of 2011, additional, and more powerful, bag massagers were fitted to the Discharger to cope with bags of prills being received in even more consolidated a condition. Site Manager, Darren Copson, confirms that the additional massagers have solved the problem by returning the bag unloading process back to its original efficiency.

To learn more about ‘Spiroflow’ Bulk Bag Dischargers and Flexible Screw Conveyors plus their ranges of Aero-Mechanical Conveyors, Tubular Drag Conveyors and Vacuum Conveyors and also about their Bulk Bag Fillers too, visit their web site at www.spiroflow.com or call them on +44 (0)1200 422525 to discuss your specific requirements.

Schneider Electric brings Access to Energy for 45,000 primary school pupils all across Kenya