The foundation for efficient mixing 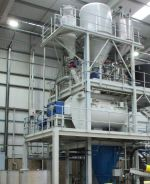 Two different manufacturers of cementitious products are both relying on equipment from JR?Boone to ensure    efficient mixing – one company is using a Helical Blade mixer while the other is using a Delta Blade version

Instarmac manufactures specialist cements, adhesives and grouts for the highway maintenance, streetscape, commercial flooring and contract tiling markets, so places great demands on its mixing plant. Therefore, when the time came to move to its new £16,000,000 purpose built production facility in Tamworth, upgrading the existing machinery was top priority.

The company was using a 2000l paddle mixer, but this became unable to  produce such sizeable quantities. Instarmac selected a 4000l helical blade (ribbon) mixer from JR Boone as a replacement, which has doubled the size of batch production, while also producing consistently reliable results.

During a series of tests using Boone’s 160l mobile test mixer, all Instarmac’s product types were trialled at the client’s site, and found to be mixed well within the specification and times required using a Horizontal Helical Blade installation.

Paul Evans, plant manager at Instarmac, said: “Depending on what the product is, mix times and blade speeds vary greatly. Some mixes have to be looked after very precisely.

“The technology behind the mixing blade is all-important, especially for high shear mixes. After successful trials we placed an order for the 4000l unit plus a 40l pilot batch mixer to enable further development of our range of products.

“We have found the results achieved on this lab plant have been scaled up to the production size consistently.”

The mixer is designed to deal with adhesive pastes having a bulk density between 1.3 and 1.6 tons/M3, and viscosities ranging from 3000 to 6000 CP. Maximum batch weight is 6.4 tons, with a typical cycle time of 30 minutes.

All contact parts are fabricated from 304 stainless steel. The unit is free standing, consisting of a semi-omega trough with flat ends on which are mounted outboard bearings carrying an interrupted double helix agitator; adjustable packed glands seal the agitator as it passes through the ends.

Located on the side of the trough are two hinged cleaning/inspection doors with quick release clamps and code key safety interlock bolts. Discharge is provided by a pneumatically operated NDP outlet valve.

In a separate application, but in a similar industry, cementitious flooring manufacturer F Ball produces flooring adhesives, levelling products and grouts. The company has recently developed a new factory, with the focus on providing efficient production with low energy usage. In order to meet such requirements, JR?Boone has supplied a Horizontal Delta Blade mixer which is said to achieve a high throughput, with a short mixing cycle.

The process comprises weigh hoppers that feed the mixer, discharging via a ‘bomb’ door to an underhopper that feeds a packaging and palletisation line beneath. This process requires a short mixing cycle to achieve a batch time of under two minutes for a 2 tonne mix.

The plant is designed to produce up to 30 tonnes of blended material per hour. At any time there may be up to six batches within the process. With this amount of material, mixing speed and efficiency is paramount, thoroughly blending the additives throughout the bulk materials before the bomb door opens and the mixed material is deposited to the underhopper.

A key objective of the plant was to have as small an environmental impact as possible, and that meant minimising the energy used – for example, the use of gravity fed rather than mechanically conveyed processes. This energy efficiency also extends to the mixer. The Delta Blade is a plough type mixer, designed to produce higher levels of shear with lower power consmption than more conventional type mixers. This means batches are mixed quickly, thoroughly and homogenously using minimum energy, reducing the carbon footprint of the new installation.