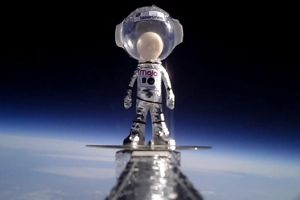 He has been fired 20 miles into space, crash-landed in a hotel car park, lost his head and nearly been eaten after being mistaken for a novelty chocolate bar – but mini explorer Mojo Man has survived his great adventure.

Created using parts built on the Stratasys Mojo 3D Printer, engineer Shaun Whitehead reported the six-inch figure missing in action after he blasted him into the Leicestershire sky on Saturday as part of an experiment which involved taking pictures of the edge of space.

While the equipment floated back to Earth, Mojo Man was nowhere to be found.

Following a story in a local newspaper requesting  help to find the missing diminutive spaceman – who was likely to be lying somewhere in the county – he was duly found.

So, whether you are testing for form, fit or function, the Mojo 3D Printer works easily with CAD software – bringing ideas to life with just the push of a button. The Mojo produces models in ABS™ production-grade thermoplastic, so you know they will be durable and high quality – and after dropping in from outer space, they need to be!

The Renaissance of UK manufacturing?

Manufacturing employers favour workers that are adaptable, willing to upskill and resilient