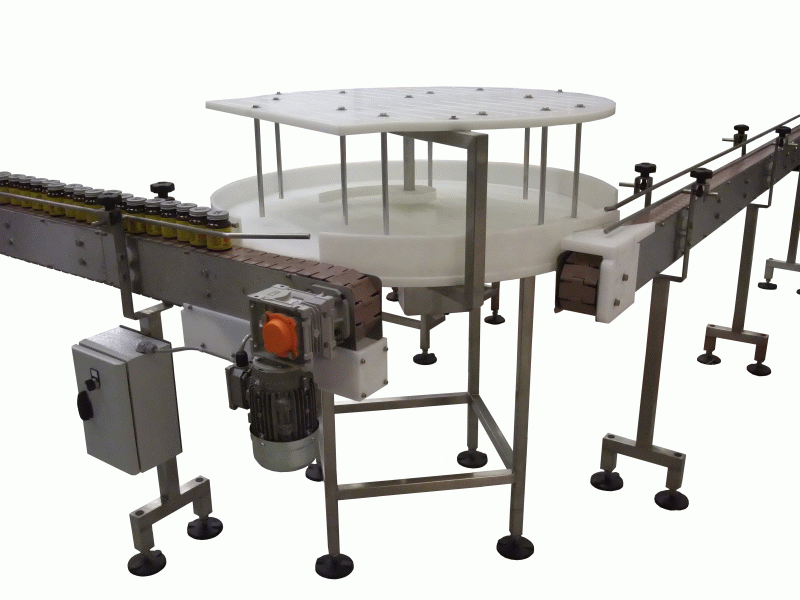 UPM Conveyors achieved a 40% saving in production for the largest  manufacturers of confectionery by offering a solution for not only transferring toffees from their wrapping line to their multi head weigher but to also reduce the temperature from 80c to 20c prior to being bagged so offering a payback time of only 4 months for the system.

UPM were required to offer a total system including a stand alone air cooled chiller to supply cold water at 8c to four off water cooled condensers which were each fitted with four axial fans to provide a blanket of chilled air onto the 1000mm wide belt conveyor to cater for a throughput rate of 360 kilos per hour which equates to 72,000 toffees each weighing 5 grams.

Access to the conveyor was provided with four hinged stainless steel side access panels and the belt has a quick access facility for fast clean down and the system has now been in operation from day one 24/7 trouble free exceeding the customers expectations plus UPM were able to comply with the high care specification required for the confectionary production line with the belt conveyor constructed from High Molecular Weigh Polyethelene (HMWPE) incorporating the unique design of automatic belt tracking and tensioning for which UPM were awarded the Queens Award for Innovation and all support frames are fabricated from Stainless Steel grade 316 and the system complies to IP67.

UPM Conveyors have developed a new version of their Rotary Table (Lazy Susan) to operate as an integrated part of a product handling system or to act as a stand alone unit to act as a buffer when required for accumulating and unloading product but to also ensure total evacuation and as standard incorporating variable speed control for £1600.00 which UPM claim is the most competitive price in the market.

An Optional Extra is the overhead mounted multi adjustable product flow orientation guide to ensure “first in first out of product” plus UPM guarantee the elimination of any operator trap points as the underside of the table is totally enclosed and conforms to all Health and Safety at Work Acts.

UPM Launched the Lazy Susan at the FOODEX show which resulted in several orders from contract packers for 30 units to improve efficiency and better staff utilization and UPM were so impressed with the results achieved during the exhibition plus the introduction to new potential customers that they booked the same stand for the next show in 2013.

In feed and out feed belt conveyors can also be supplied from a standard range of plastic link belts which include 90 and 180 degree bends allowing versatility into a production area where space is limited but UPM can custom engineer a system at no extra cost, as all manufacture is carried out in-house including fabrication programming and control build allowing complete control of quality; inspection and maintaining delivery promises.

UPM were awarded the Queens Award for Innovation in their production of High Molecular Weight Polyethylene (HMWPE) belt conveyors, which has now been extended to the range of Rotary tables, which are available in a variety of diameters.