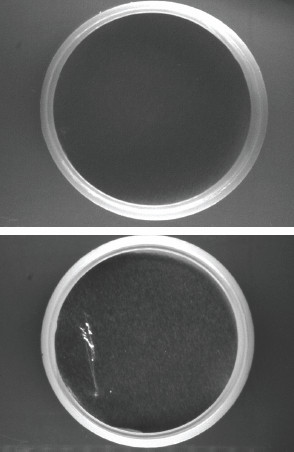 Checking the integrity of foil seals on food and drinks containers presents a number of challenges to industrial vision techniques. Robert Pounder describes how a solution from Olmec-UK, which comprises a multi-camera, multi-illumination high speed inspection system, overcomes these challenges

Many plastic or glass containers containing powdered food and drinks, such as coffee, sweeteners, nutritional drinks etc, are sealed at the filling line with an air-tight seal in order to maintain product freshness and increase shelf life. The seals also protect against contamination, humidity, tampering and leakages, and usually consist of a foil sealed to the top of the container, protected by a plastic screw lid.

In most plants, the lids are delivered to the filling line already containing a multi-layered foil seal. The lid is automatically screwed onto the container, which brings the seal into contact with the top surface of the container. The sealing process is completed using an induction heater in a container sealing station. Since the lids are mass produced elsewhere and then transported to the filling line, there is a risk that the foil can be dented, delaminated or otherwise damaged during transit. If the foil is damaged and doesn’t seal properly then product integrity can be compromised. Cost and time savings can be made if lids with defective foil inserts can be identified and rejected before they are sealed to the jars. Multi-camera industrial vision inspection techniques have been developed to address this problem.

However, inspecting foil inserts presents a number of challenges, including:

• Range of inspections required, which include blisters, dents, creases and integrity of the foil at the rim of the seal

• Random orientation of the defects

• The depth of the foil inside the lid

• The speed of inspection

• Integration with a reject mechanism

Illumination is one of the biggest challenges. Since the foil is reflective, direct illumination will identify some defects but not foil lifts or slight bubbling in the material. These require incident or low angle lighting from one side, which means that no single illumination method will be suitable.

Olmec-UK, a vision systems integrator, has recently implemented a multi-camera, multi-illumination high speed inspection system for such an inspection requirement at a healthcare company. In order to capture all of the defects, the foil needs to be illuminated from different directions, so the vision solution consisted of three individual illumination sources arranged in a ring, and three individual cameras positioned at different angles to the foil. The lighting runs in a sequence of three illumination combinations for each of the three cameras, thus producing nine individual images for each lid inspected. The lighting sequence first illuminates the lid fully, which exposes half the defects, then illuminates from two separate sides so that dents would show as dark areas while foil lifts would reflect the light and be seen as very bright areas. Images were recorded at 15ms intervals – three images followed by another three images 15 ms later.

One unexpected challenge was that during the development process, it was discovered that the product could rotate slightly in a random fashion during the 15ms interval between image acquisitions. This meant that the image processing system had to spend time searching the region of interest in each image to correlate defect co-ordinates between images. Even allowing for these high image processing and analysis demands, an overall analysis cycle of 140ms was achieved for the 9 images for each lid, which means that the system can inspect over 400 parts per minute. Operating at such high speeds means that it is essential to inspect the image effectively in the first place since there is no time for second checks to confirm the decision.

The new system has been proven within the production line, with an air knife mechanism to fire rejected lids from the line and protect the high quality expectations. The system features Olmec’s modular easy-to-use VP3 user interface that allows engineers to make adjustments to production-line vision systems without needing to be vision experts. Configured to run in the Windows 7 environment using a large touchscreen, the VP3 interface features large, simple to use buttons for set-up, system configuration and statistics with a clear ‘pass/fail’ result indicator. Recipe selection can be made through simple drop-down boxes with an auto-complete function for multiple recipes. Provision is made to store images of both good and failed product, and images from failed components can easily be reviewed while measurement continues in the background.  Presentation of statistics such as total number of good or failed products can also be controlled and the system can also be set up for remote diagnostics, if required.