No room for error in mushroom weighing 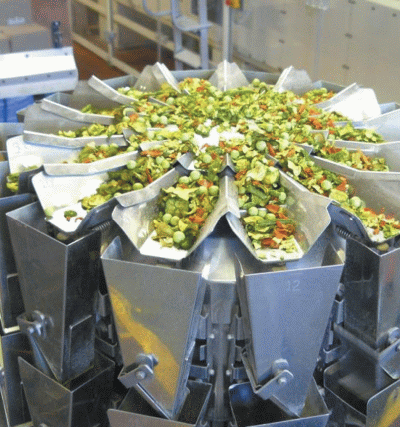 Unilever Bestfoods Knorr site at Duppigheim in Alsace was experiencing problems with its volumetric machines. Laurent Ghesquière, director of the dehydrated products plant, which has 16 packing lines, one dedicated to producing catering packs, explained: “The recipe for Knorr’s Chasseur sauce calls for 1.5g of dehydrated mushrooms per 4-side-seal sachet.”

“This weight could never be accurately achieved, and complaints had been received about the lack of mushrooms in some sachets. The dehydrated mushrooms were also breaking up in the volumetric machines, producing a fine dust which threatened to contaminate the factory and which could prevent the sauce sachets from being adequately sealed.”

To help increase yield and improve profitability, lighter weight ingredients are now being added to each mix via Ishida’s ‘Lilliput’ weigher, said to be the world’s smallest multihead weigher. This is in preference to the volumetric dosing previously used.

With its 50cc hoppers and compact 650mm x 650mm footprint, the ‘Lilliput’ was developed to handle very low target weights. It can deliver up to 120 accurate weighments per minute, with target weights ranging from 0.7 up to 40g. At such small weights, even minor air currents, let alone jolts or collisions, can interfere with weighing accuracy, so the 14-head weigher was firmly anchored by Ishida engineers with a robust arm. This not only avoids excessive movement, but also provides a way of lowering the machine into a position for easy cleaning.

Aside from solving the volumetric dosing problems, the company reports that the switch to multihead weighing has increased efficiency by up to 10%, with 10 more sachets per minute being filled than previously.

Relishing the concept of traceability