Oiling the wheels in lubricant making

The Fuchs Lubricants facility in Stoke-on-Trent is responsible for producing approximately 10% of UK lubricant demand and manufacturers over 500 complex lubricant formulations ranging from engine oils to metal working fluids and medicinal products such as petroleum jelly.

As demand for products increased, the decision was taken to migrate from the increasingly obsolete process control system and replace it with a Siemens’ PCS 7 with SIMATIC Batch distributed control system (DCS). This decision was based on the confidence gained through an earlier trial undertaken on the medicinal-based petroleum jelly production line. The success of this trial, which included a reduction in plant downtime, convinced the production management team to extend the role of PCS 7 into other areas of the process.

A key factor when pre-planning the migration was that the changeover would not interfere with the production capability. The answer was to implement a staged migration, so that as identified elements of the system were switched over, the existing system was kept running in tandem.  With over 5,000 I/Os, 1,000 valves, 90 raw material tanks, a large number of finished product tanks and 38 blending vessels to contend with, it was clear this would be a major challenge.  However, through careful scheduling, the joint efforts of the Fuchs and Siemens’ teams ensured that the switchover occurred seamlessly without any disruption to production and within the timescales laid out. 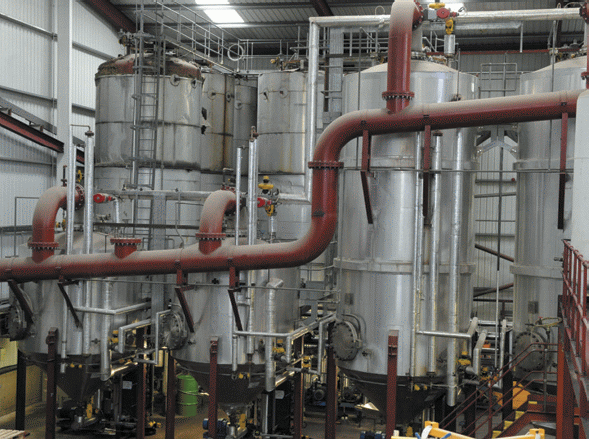 The PCS 7 system is now up and running. Steve Hallam, engineering manager for Fuchs, outlined the benefits of the system: “We are achieving a significant first time pass rate for the finished products which has increased from 85% to 97%. This means a drop in failure rates to just 3% and that adds up to significantly lower levels of waste product having to be thrown away and substantial cost savings in terms of raw material consumption.  In addition, our knowledge of the process is now far more in-depth, as the data we can extract from the control system informs us exactly of the type of key and highly accurate information we require to ensure product consistency and drive improvements to our efficiencies – such as around how we can reduce cycle times.   This allows us to plan our production scheduling far more accurately, as well as driving flexibility.”

PCS 7 also allows the engineering team to undertake a continuous improvement programme so that constant scrutiny is given to how the system can help improve production efficiency even further. Hallam reports that Fuchs is committed to realising the full potential of the control system, the next stage being to look closely at the feasibility of real time production planning.

System transparency is another benefit for Fuchs. The ability to access clear process audit trails for all products helps satisfy customer demands.    Data intelligence follows the product through the process from raw material intake, via the blending stage through to filling up the finished product tank.   The system’s clear, prescriptive process helps ensure product consistency and, by association, customer satisfaction.

Another operational benefit is the elimination of the potential for cross-contamination issues during storage.  Also, a need for high plant availability has been supported since the inception of the system and this is contributing to the efficiency gains at the site.  With the ability to remotely access the system from other locations via VPN dial-in, the engineering team can analyse and respond to any issue quickly and rectify problems before they hinder production.

By migrating to PC7 Fuchs Lubricants can continue to seek further improvements.

Putting in the groundwork for system upgrade