Peel back waste to reveal energy 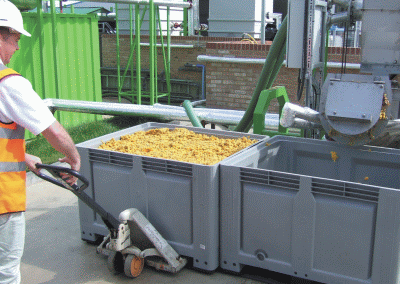 A renewable energy facility from BioWayste is helping Orchard House Foods convert its waste fruit and wash-water into electricity to help power the factory, without having to bear any of the capital costs

In the food industry, turning food waste into electricity usually requires a major financial outlay to cover the cost of building and operating a treatment plant. However, a producer of fresh fruit products, Orchard House Foods, has introduced a Build-Own-Operate renewable energy facility from BioWayste. The system is designed and fully managed by BioWayste and converts rejected fruit, peelings and wash-water into electricity to help power the factory. It includes two small footprint (14m x 3.5m) high-rate horizontal reactors that convert the fruit waste into biomethane.

Tim Verrinder, managing director of Orchard House Foods, said: “We were the creators of the prepared fruit salad market, so it’s great to be first again with highly innovative waste-to-energy technology that gives us renewable electricity, as well as significantly reducing our carbon footprint and disposal costs. Importantly, BioWayste’s Build-Own-Operate option also means that we’ve had none of the capital outlay.

“The very compact BioWayste design has also been a big selling point for us because unlike today’s typically large AD systems, we’ve been able to put the plant adjacent to our factories.” He continued: “And apart from some organisation of the macerating process during installation, the BioWayste plant has required virtually no changes to our operational procedures.”

As well as the treatment facility, BioWayste also takes responsibility for the waste, which was previously either sent to sewer or transported away – and was subject to ever-increasing fuel costs and rising charges from the local water company. The BioWayste plant is currently handling around 1.5 tonnes of COD/day from the liquid waste stream and a further 4 tonnes of COD from the macerated fruit peelings. This produces biogas to power CHP generators, supplying a total of around 200kW of electricity back to the factory for use in the 24/7 production process. Heat recovered from the CHP engines is used to maintain the anaerobic digesters at their optimum 38°C. At full capacity the plant is capable of handling nearly 7 tonnes of COD/day. Waste volume has been reduced by 80%. 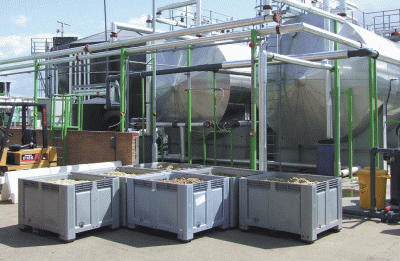 David Orme, UK technical sales manager at BioWayste said: “We carried out our own extensive in-house laboratory tests at BioWayste, which showed that the factory’s effluent stream could be used as a substrate for an AD plant. Further analysis showed that macerating the solid waste and extracting the juice to supplement the liquid waste would significantly increase potential energy yields. This information enabled us to formulate the most suitable plant design for Orchard House Foods.”

Orme explained that with the juice extracted there remained the question of what to do with the macerated solids. Drying it and using it to power a biofuel boiler was considered but data showed there to be insufficient calorific benefit in the material to make this economically viable. Fortunately though, as an animal feed, the squeezed peel had lost very little of its value as the fibre was still present and the product was now more palatable and easier to handle.

The final design for the Orchard House Foods plant comprised two BioWayste M150 horizontal reactors to convert the COD into biogas – plus three 120kW CHP engines to produce electricity. In addition, a macerator and screw-press were incorporated for the fruit peelings.

Commissioning commenced with seeding the reactors and gradually increasing load to acclimatise the biomass. BioWayste also installed an integrated SCADA system to monitor and control the process and to ensure it remained stable.

Orme added: “There’s a learning curve to implementing and then optimising any new plant, but our design rapidly showed itself to be capable of treating the fruit waste. Maximising gas production depended on getting the most out of the fruit peelings, so this was primarily a question of ensuring consistent management of the macerating process. As soon as this had been achieved, gas production climbed steadily towards optimum levels.

“Solids production in an AD process is minimal anyway, but by limiting solids through the specially designed BioWayste reactors, the need for de-sludging is virtually eliminated. Operationally, this makes for a very manageable system that requires a much smaller footprint than a conventional AD plant.”