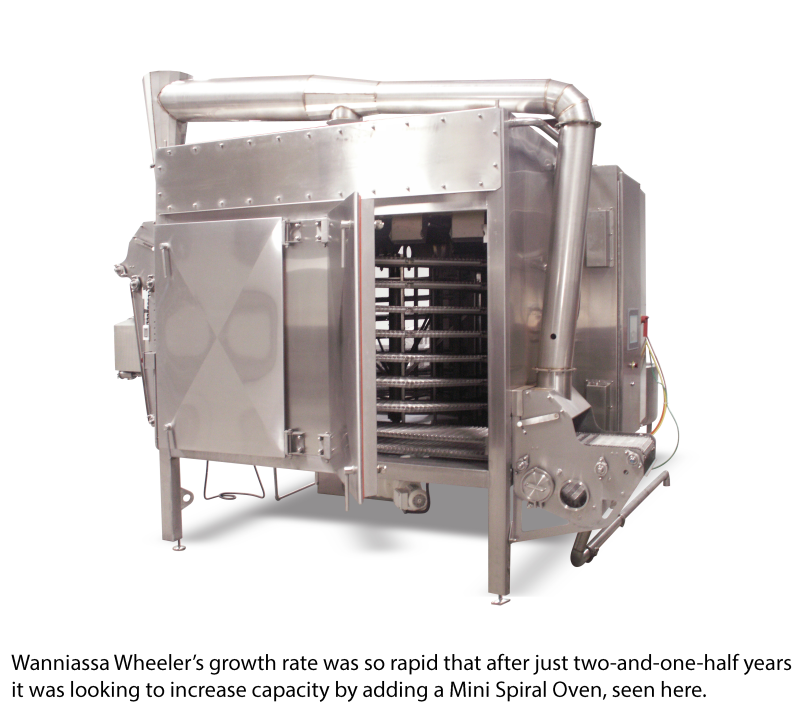 For any start-up enterprise the goal is to hit the ground running and succeed beyond all expectations. The path getting there is often not smooth nor with typically fast results but for one food processor that completely shifted its core business a single piece of economical yet highly efficient and flexible cooking equipment led to exponential growth. Such is the case with Wanniassa Wheeler Food, an Australian food processor that four years ago planned to make dramatic changes to its business strategy: shift from being a low-volume supplier for a local franchise food chain to becoming a high-volume food processor providing a variety of culinary and convenience foods to global wholesalers, retailers and other food processors.

This would be a tall order for most companies, but Wanniassa Wheeler had a vision that reconfiguring its 5,500 square meter facility with the proper equipment would enable the creation of a diversified line of cooked protein products while still continuing to supply its 47-store chain of Ali Baba QSR (quick service restaurants) outlets. The Ali Baba line includes Lebanese cuisine such as chicken kebabs, kafta fingers, salads and other items aimed at the casual dining segment.

The chief idea for the new strategy was to cook protein products including chicken, lamb, beef, and turkey in the high volumes needed to satisfy supermarkets and even big box outlets such as Costco while also offering quality ranging from restaurant to gourmet level.

“Our experience in cooking various meat products was limited to combination and walk-in ovens, but we knew those would not satisfy our requirement to have a high care facility,” explains Ali Marjan, manager of strategic and business development for Wanniassa Wheeler. “We wanted to minimize product contamination and restrict human handling of products to only placing them on a belt at the front end of the oven. After cooking, the product would automatically be transported to a chilling system and either shipped or stored.”

Marjan felt sure that some type of conveyor oven would be the solution, but he had not heard of the spiral oven until Barry Hansell, sales manager at Sydney’s Reactive Engineering, a supplier of processing and packaging equipment, recommended it as an option to Wanniassa Wheeler.

The spiral oven, which offers a minimal footprint, increased yield, and product consistency, has been adopted as the continuous cooking system of choice among many ready-to-eat frozen and chilled food processors. It allows them the versatility to roast, steam, bake, broil or even pasteurize ready-meals in a single piece of equipment. Examples of the products range from baked quiches, meatballs, and chicken wings, to oven-roasted vegetables and steamed chicken breast.

Spiral ovens are available in a variety of sizes, but Marjan was inclined to look for smaller sizes that were still capable of producing higher volumes and were easy to operate while cooking a variety of products.

After reviewing a range of models, Marjan was convinced that the correct solution for his new operation was the Micro Spiral Oven® developed by Unitherm Food Systems (unithermfoodsystems.com). This supplier previously developed the Mini Spiral Oven® that had been the smallest of its kind on the market prior to the release of the Micro version, which is 1.5 meters wide x 2 m long x 2 m tall and has over 18 linear meters of belt. Unitherm also manufactures other spiral oven models that are up to 6.4 m wide x 7.9 m long x 6 m tall.

One of the features of this oven that Marjan appreciates most is its self-basting capability. “As you are cooking – particularly when we get into some higher volumes – the self-basting capabilities of this spiral oven help to improve yields,” he says. “Because the products travel upward on the belt from the bottom of the spiral oven, as the products cook through the juices that result from the cooking start basting downward onto the products below. The result is some additional yield, but the more important difference is that you are adding a lot of flavor, which is definitely a winner.”

In addition to protein products, Marjan says Wanniassa Wheeler is now roasting vegetables in its Micro Spiral Oven, including items such as eggplant, peppers, potatoes and items that are put into Ali Baba dips. Even though Wanniassa Wheeler’s Micro Spiral Oven was capable of cooking up to 280kg per hour, depending on the product, the company’s growth rate was so rapid that after just two-and-one-half years they were looking to add capacity.

At that point Marjan says he was convinced that adding a Unitherm Mini Spiral Oven was the right solution. With overall dimensions of 2.4 m wide x 3.6 m long x 3.9 m tall the Mini Spiral would not only increase Wanniassa Wheeler’s cooking capacity to approximately 680 kg per hour, but it would also address the growing demand for alternate uses including the ability to provide customers with an in-house test cooking facility.

Marjan says another important benefit of the spiral oven is food safety provided by “in-cook” pasteurisation. “Since we are a straight cook-chill business, one of the important features of our spiral oven we selected is the ‘high-steam’ process,” he says. “If you compare the spiral oven from Unitherm with a combi oven (combination convention oven and steamer) that has the same functions, they normally remain at 99-100 degrees C (212°F). With our Micro and Mini Spiral ovens the steam goes up to 130 degrees C (266° F). A steam separation system allows this high steam to contact products at the beginning of the process, and then they go through a slow process, perhaps another two or three minutes, depending on the product. This process results in what I call an ‘in-cook pasteurization process’ that kills pathogens that could survive in a typical cook-chill process. So, as long as we chill the product quickly enough, we are able to maintain that high level of food safety.”

Marjan says that installation of the micro spiral got Wanniassa Wheeler up to speed quickly, and resulted in its successful entry into the retail segment. Shortly afterward, the company began to receive inquiries for authentic flame-grilled products.

“Our traditional products were sliced protein products, so having a flame grill allowed us to work with even more meat goods, such as 120-gram breast fillet that are flame grilled, and the same with beefsteak products and lamb products that are marked. So, the flame grill gives you colour, and it also caramelises to a certain degree. In the end, the appearance was the biggest benefit.”

Because the micro spiral oven from Unitherm was able to connect directly to the flame grill, the production line could easily be expanded. This combination of micro spiral oven and flame grill was responsible for opening up new sales channels for Wanniassa Wheeler. For example, some of supermarkets started to work with the company to develop a line of flame grilled chicken tenders, breasts, and wings. Also, Wanniassa Wheeler was able to enter the burger patty market for the first time. One of its new products is a high-end line of wagyu beef burger patties, which commands a high price like Angus beef products, as well as regular beef burger patties.

Marjan says his two spiral ovens were in large part responsible for his company’s rapid growth. Not only did this equipment enable Wanniassa Wheeler to exceed its goals quickly, but it also facilitated the addition of the flame grill in an in-line configuration, which allowed the company to expand into additional products and markets rapidly. Further, these additional capital investments were able to be implemented without going through the efforts to research and test equipment from another vendor, thereby getting to market faster and more efficiently.