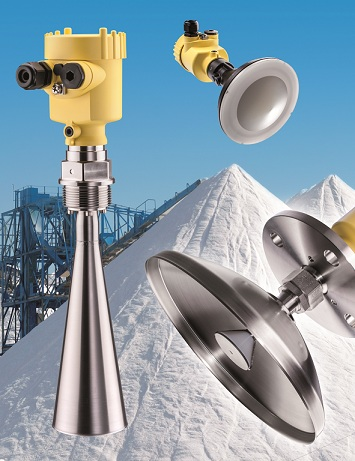 This February 2013, less than 9 years after introducing VEGAPULS 68, the first non contact radar sensor for bulk solids, VEGA have delivered the 100,000th sensor. “This production milestone carries forward the success story of radar level sensors in process automation. Today, they are the all-round level transmitter for liquids and bulk solids”, commented Günter Kech, Managing Director, “Radar technology is on a success trajectory and we will ensure that it stays there by even further simplifying it for level measurement of bulk solids in future.”

The 100,000th bulk solids radar instrument is a VEGAPULS SR68. The landmark sensor went to Bühler in Switzerland, who are using it for level measurement in a 25-metre-high cement silo.

VEGA Grieshaber KG launched VEGAPULS 68, the first radar sensor specifically tailored to applications in the bulk solids industry, on the market in 2004. Compared to radar sensors for liquids, the bulk solids radar sensor is capable of detecting and measuring signals a 1,000 times smaller – signals that were previously masked by ‘noise’.

The two-wire loop powered sensors have since become ‘the’ alternative to maintenance-intensive mechanical ‘plumb bob’ systems, or ultrasonic sensors, which require a clear, dust-free view to the product. Thanks to simple application parameters, only a few settings are needed to fine-tune the radar sensor to the measurement. The result is reliable reading, completely independent of dust, filling noise, strong air currents and high temperatures, with no loss of echo issues.

Three sensor variants ensure the advantages of non contact radar technology can fit all kinds of applications, as well as measuring and temperature ranges. VEGAPULS 68 is optimized for ranges up to 75 m and temperatures up to 400° C, while VEGAPULS 67 and VEGAPULS SR68 are designed for standard applications. One basic technology covers a wide spectrum – from level measurement in clinker coolers at 1,500° C, or grain silos, to level monitoring in rock crushers.

New CDM Regs: Be careful for what you wish for, advises expert