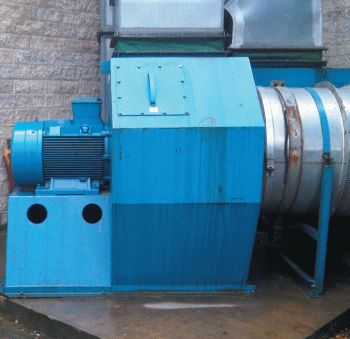 Problem: Specialist metal forging company Firth Rixson had relocated several grinding stations, concentrating them in one area with centralised dust extraction in the fettling and descaling plant provided by a 75 kW extraction fan motor, running constantly. With not all of the machines running simultaneously, there was often more dust extraction capacity than needed. The fan ducting was being eroded by the constant inflow of abrasive metal dust.

Solution: ABB Drives Alliance partner Halcyon Drives suggested introducing an ABB industrial drive to power the 75 kW extraction fan motor. The installation has two motors (one a standby) and the standby had to be available at all times.

Because savings at this stage did not justify two drives, a dual standby option was arranged by having a change-over mechanism, so either motor could be driven by the drive. In the unlikely event of a problem with the drive, either motor could be started using the existing star-delta start until the drive was back in service.

The reduced speed using variable speed control of the motor reduced the airflow and significantly increased the life expectancy of the ducting. By reducing the speed of the fan, savings of 20% on consumed energy were achieved.