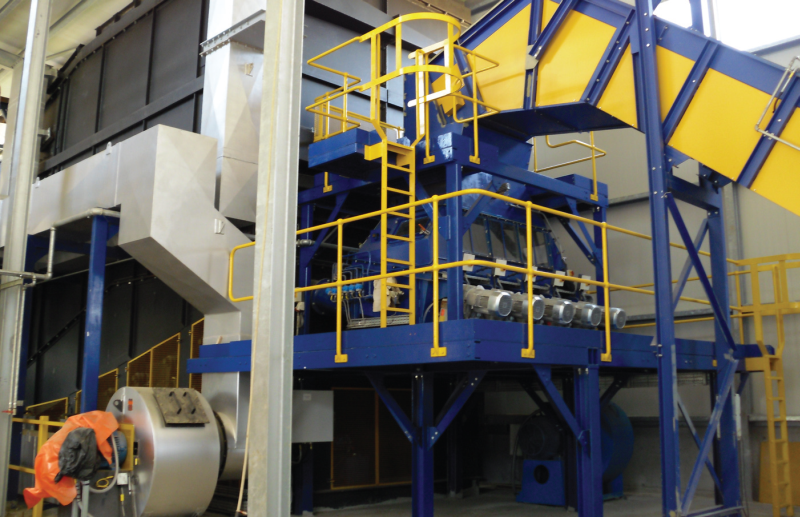 Biomass Power and solution partner, Capula have specified Siemens’ PCS7 control technology to help support a turnkey design and build power plant solution. The company was set up in 2009, when managing director Ben Talbott and engineering director Martin Riley, spotted a gap in the biomass power plant market.  Their solution was to seek to overcome the inherent issues normally associated with biomass power station development, such as planning restrictions, development timescales and fuel handling limitations.

Riley said: “The key to our market offering has been our ability to create the entire biomass gasification process in a horizontal and modular turnkey format, as opposed, for instance, to the traditional and large-scale vertical solution. We design and manufacture at our premises and then simply turn up on site to effectively bolt the design together, thereby saving significant amounts of time and expense. This approach allows us to confine the entire biomass power plant process technology solution within sub 10m  high buildings and as a result counter-acts planning objections about scale, as well as drastically reducing the construction timeframes.  Our plants, for example, do not look out of place within any normally recognized industrial site.”

Biomass Power concentrate upon smaller-sized power stations of up to 5MWe,  which can generate green power in locations where larger sized buildings would be unacceptable. Biomass also seek to create fuel for its power plants from waste materials available from local sources.

Most biomass plants use only the cleanest of fuels from which to develop power, whereas Biomass Power’s solution enables it to handle a long list of waste streams including forestry, agricultural residues, straw and miscantus.  Riley continued: “We don’t look at clean biomass fuel, we look at waste – and especially local waste – as the key source of fuel from which to generate energy.  Our technology allows us, unlike many others, to process a diverse range of waste matter.  This offers real flexibility to the marketplace and is why we are receiving a lot of interest from across the world in our technology.”

One of the first Biomass Power plants was commissioned this summer in Bagnolo di Po, Rovigo in Italy.  The plant is set in a rural agricultural region where there would have been strong opposition to any proposal to build a traditional and large-scale power plant.  In this case, the horizontally-based and less intrusive Biomass Power design concept was accepted by the local planners.  The plant has a capacity of 15-20MW thermal and is rated at 3.25-4.25MWe gross producing green electricity which is to be exported to the grid.  The plant uses local farming residue as fuel, and the subsequent electricity generated by the plant will provide power to the local general hospital. The renewable energy power plant is anticipated to help save nearly 12,000 tonnes of carbon annually.

The plant’s technology is based on an optimised process of gasification, followed by secondary combustion which has the capability of handling a range of fuels at levels of up to 30-40,000 tonnes per year.

A heavy duty moving floor feeds the fuel into a reciprocating step grate via a finitely controlled metering device.  The grate gasifies the fuel to produce a volatile gas.  This is then combusted at above 850°C to ensure complete combustion. Once the gasification and then secondary combustion is complete, the hot gas is exchanged via a water tube boiler into 450°C steam at high pressure.  This is then used to produce electricity in a vacuum condensing turbine.  Finally, once the hot gases are released from the boiler at low temperature they go through a dust filtering treatment process which monitors flue gas emissions constantly to ensure compliance with existing emission standards.

Riley explained the benefits of the Siemens’ PCS7: “We began discussions with combustion experts Capula for the Bagnolo and future projects, as we wanted to move away from previous control systems which we felt were often dis-jointed, hard to upgrade and challenging to maintain over a period of time.  Capula identified the standardised approach and operational efficiencies we could obtain via  Siemens’ PCS7 control system. We closely examined the benefits it would deliver and the combination of many valued enhanced control features such as fault-finding and real time data availability, together with Siemens’ worldwide back-up and ongoing technical support, made it the ideal choice as the control system for our turnkey power plants going forward.

“In a rapidly changing marketplace and with power plants expected to be operational for up to 25 years, we now have the assurance that by using PCS7 we are in many ways future-proofing our plants with a standardized approach to the automated control system.  This will ensure consistency of technology development and access to subsequent upgrades and service support for the foreseeable future.”