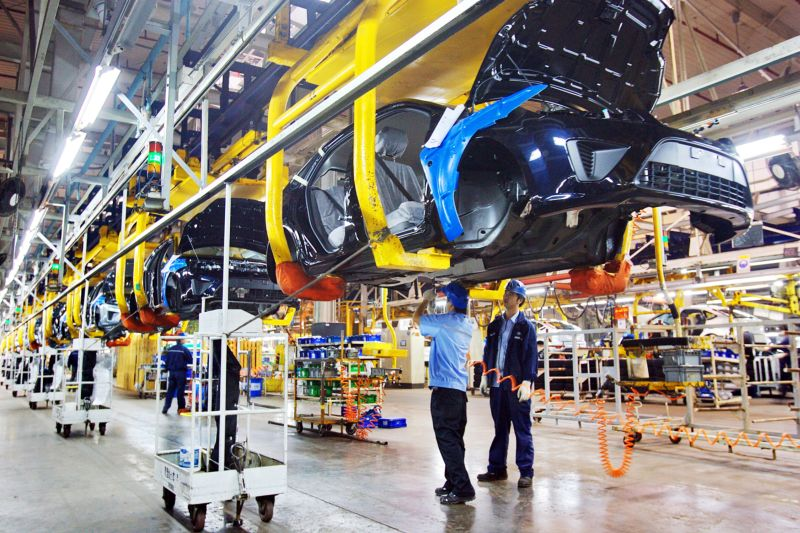 Over the past few years, the Western automotive industry has seen possibly its largest opportunity, serving what is now the world’s largest vehicle market – China. As part of this trend, the Changan Ford Mazda Nanjing Company was established by Ford & Mazda in 2004. The plant is based on the Mazda “Triangle Control” concept and produces multiple models, meaning a high degree of flexibility is required.

The Triangle Control concept is a hierarchical principle intended to address plant control at all levels from model data at the top to actuators and sensors at the bottom. The overall aim is to keep things simple and standardized. As a hierarchical system, networks play a key role, and the network Mazda chose was CC-Link. The plant was a significant project for Mitsubishi Electric, whose systems are used extensively throughout it.

A particular example of how the architecture allows flexibility is in the body shop where the line must be able to cope with the production of various different models. The body framing system currently allows the production of six different well known models; Ford’s Fiesta (sedan & wagon), Mazda’s 2 (sedan & wagon) and 3 (old & new versions), as well as reserving capacity for two additional future models. The entire shop is automated using Mitsubishi controllers and CC-Link networks. The system divides into 24 stations, with each having multiple controllers in charge of three to four welding robots, making almost 100 robots total. A further 10 stations handle the under body operations. CC-Link helps maintain operational flexibility by allowing production engineers to conveniently reserve future configurations. When actual production machinery is added, it’s a simple matter to enable the new parts of the network. This leads to a “plug and play” style of network configuration, significantly reducing project lead time.

The welding line is a good demonstration of CC-Link’s high degree of reliability even in adverse conditions. Despite the hostile operating environment, the line has run for approximately seven years without experiencing any hardware failure or network malfunction related downtime. Further enhancing this exemplary record is the easy system maintainability enabled by the network’s diagnostics. There is no need for complicated parameter settings, and the engineering team found it easy to create clear diagnostic displays to allow operators to see network status at a glance. Further, if faults were to occur, CC-Link allows malfunctioning stations to be removed from the network, serviced and then returned to operation without disrupting operation for the rest of the line.

The cost saving benefits of CC-Link were also a key factor in its selection. The use of standard cabling was seen as a major benefit, and the lack of special connectors or other additional hardware also contributed to cost effectiveness. Moreover, compact hardware footprints meant smaller cabinets could be used for network stations, allowing cost savings through smaller cabinets and location flexibility.

Finally, performance was also an important selection factor. Despite large station totals and long distance requirements, CC-Link was able to offer millisecond update times, well within the plant’s requirements for data flow and machine cycle times. “This plant was almost a textbook example of how CC-Link offers benefits to large scale applications such as those in the automotive industry”, commented John Browett, General Manager of the CC-Link Partner Association. “CC-Link has an established relationship with Ford and Mazda, beginning with the new Ford Mustang line several years ago in the US. No doubt the benefits obtained in that installation influenced the selection of CC-Link for the Nanjing plant. The plant also is further demonstration of CC-Link’s ever increasing success in China. It’s clear to see that large end users such as Ford and Mazda have a huge influence on the OEM community. Hence we expect that the obligation to provide CC-Link solutions in the Chinese market will only continue to grow. Our Gateway to China programme is intended to help European companies leverage this opportunity.”