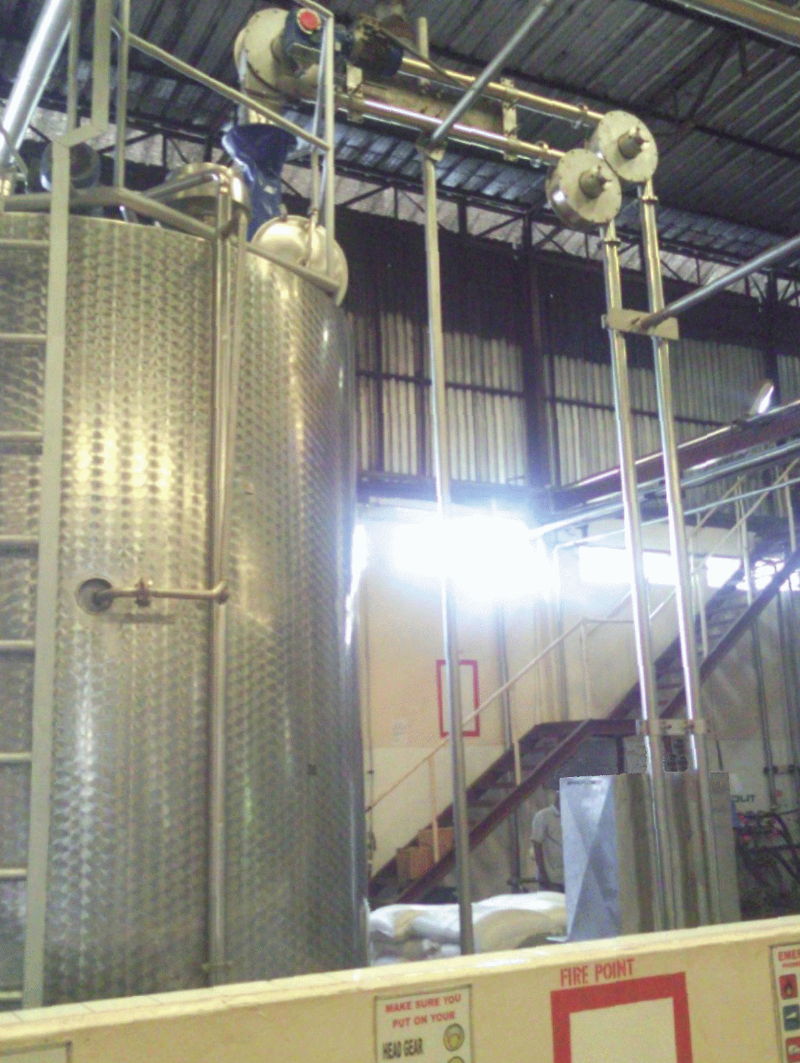 An Aero Mechanical Conveyor from Spiroflow is helping a West African manufacturer of alcoholic and non-alcoholic drinks increase syrup production from 1000l per shift to 10000l per shift, as well as ensuring the handling of the sugar is a more hygienic operation.

Kasapreko Company, a producer of alcoholic and non-alcoholic drinks based in West Africa, was in need of a solution to pump sugar into a larger storage facility. To meet this need, the company approached West Africa Pumping Services, who used its extensive network of OEMs to find the bast solution. Geo Robinson was contacted, who worked with Spiroflow to design and manufacture a conveyor to suit Kasapreko’s requirements.

The order, awarded by West Africa Pumping Services (a newly appointed representative for Spiroflow) is for a ‘Spiroflow’ Aero Mechanical Conveyor. The conveyor loads sugar into a tank in which syrup is produced during the manufacture of the drinks.

Kasapreko of Baatsonaa, Accra produces ‘Alomo Bitters’, the Authentic African Herbal Bitters made from tropical plant extracts. Alomo Bitters has its roots in traditional herbal medicines – meticulously researched by the Ghana based Centre for Scientific Research into Plant Medicine – and is well known for its medicinal values.

Due to Kasapreko increased syrup production from 1,000l per shift to 10,000l shift, the Aero Mechanical Conveyor was needed to improve the efficiency and speed by which sugar is loaded into the syrup mixing tank. As Edmond Blankson, general manager – plant & bottling, confirmed: “Not only has the ‘Spiroflow’ Aero Mechanical Conveyor assisted to increase production, it has also made the handling of the sugar a more hygienic operation.”

Blankson continued: “West Africa Pumping Services Ltd won the order because they offer local after sales support and local advice during selection of equipment for the increased factory capacity.” The ‘Spiroflow’ Aero Mechanical Conveyor has been in operation since November 2010 and has proven to be reliable.

The conveyor supplied to Kasapreko is of all stainless steel construction and of a ‘round the corner’ design – conveying sugar 4.7m vertically and 2m horizontally in a single unit driven at its outlet. Sugar is loaded into the conveyor by way of a sack tip hopper at its inlet. The hopper has a safety grid onto which bags can be rested whilst being cut open. This takes place within a dust cabinet and through a clear plastic strip curtain. The cabinet is furnished with a spigot so that it can be connected to a central dust extraction system to ensure a clean and safe working environment for the operatives.

‘Spiroflow’ Aero Mechanical Conveyors can move high volumes of material at any angle without loss of efficiency. Discs connected to a rope moving at high speed within an enclosed feed and return pipe system entrain product into their slipstreams. This is ‘mechanical vacuum conveying’ BUT without the need for a filtration system given that no air is either added to, or subtracted from, the system. They are suited to applications requiring ‘total batch transfer’ of measured amounts of material. The new, optional, DART Automatic Cable Tensioner offers automatic ‘running-in’, reduced maintenance and longer conveying cable life.