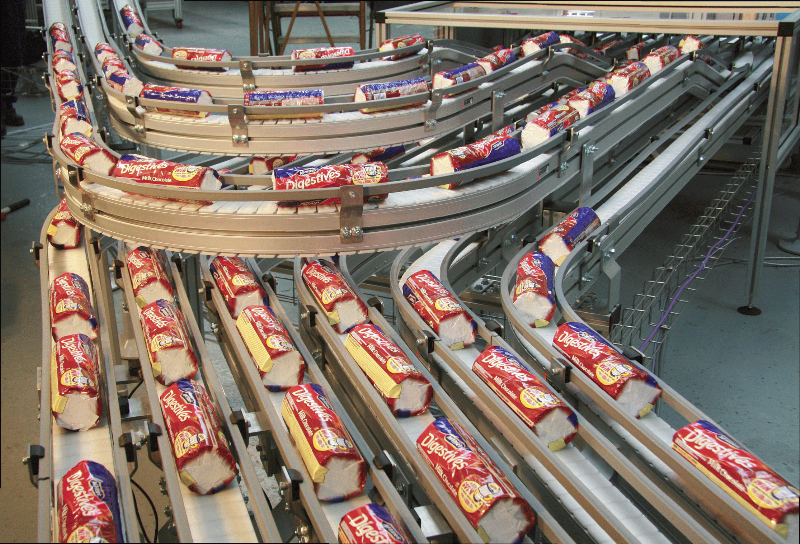 The problem of biscuits crumbling during transfer from one line to another has been solved by Ingenia Solutions using Bosch Varioflow technology.

Biscuit manufacturing is a delicate business requiring speed and precision handling. This is especially true of the humble digestive, which has a tendency to crumble if roughly treated.  For this reason, United Biscuits turned to Ingenia Solutions when it wanted to upgrade its digestive production line at the Harlesden plant. Improving productivity and quality were both key motivators.

“United Biscuits are implementing a rolling programme of work at Harlesden to improve efficiency and quality across a number of lines,” said Steve Smith, managing director of Ingenia Solutions.  “The company is probably going to replace a significant amount of equipment at the facility with the overall intention of improving quality.”

He continued:  “The key issue for them with the digestive line was the unreliability of transferring packages from one line to another which was resulting in biscuits crumbling in the packet. Unfortunately, because the packets are sealed when transferred,  damaged biscuits cannot be detected until the packets are opened by the end customer.”

It wasn’t only quality which United Biscuits wanted to improve; faster production was also a desire. “Speed doesn’t always equate to careful handling, which meant we needed to devise a bespoke solution which could deliver on both levels,” said Smith.

The brief was to replace the current biscuit transfer system and replace it with a new system which was faster and incorporated a metal detector (MD) station, biscuit transfer arrangement and two off- biscuit transfer units which direct product into the existing case packing machine.

Ingenia’s solution was centred around the Bosch Varioflow technology – the modular chain conveyor system which can be adapted to specific tasks and production layouts.

The system included a six lane bespoke conveyor arrangement with a bend at the exit of the Varioflow conveyors. The Varioflow technology interfaces seamlessly with the existing plant,with bespoke conveyors carrying the product through the metal detectors feeding through the metal detection unit. This ensures that no foreign metallic materials can be introduced into the product along with reject chutes if anything metallic is detected.

The technology has also been used to provide the transfer onto each lane of the Varioflow and also the exit. A total of three off Varioflow conveyors divert product to the twin pack area along with transfer chutes.

Smith said of the solution: “All in all we probably used half the number of motors that any other comparable manufacturer would have used for the line, which is a significant saving in both investment cost and running costs for the end user.  It is an ideal solution for any industry looking for a delicate handling solution.”

For United Biscuits, the end result was an increase in production to circa 60 packs/min and the virtual elimination of crumbly biscuits. Since the commissioning of the new line, Ingenia has started work on a further project at the Harlesden site, an order won due to the success of the digestive line.