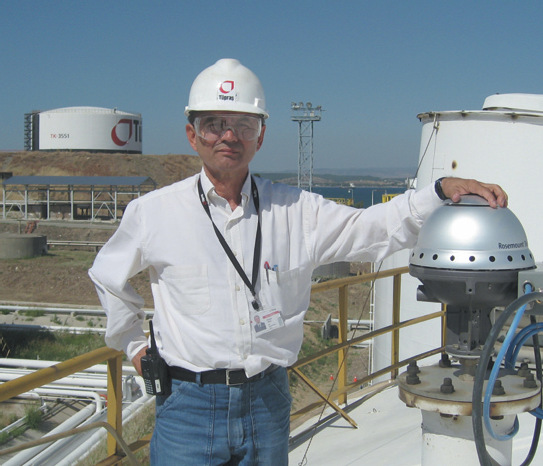 The state-owned Tüpras refinery in Izmir, Turkey has a refining capacity of 11 million tons/year and storage capacity of 1.9 million cubic metres in 164 tanks, 44 of which are used to store lube-oil and are monitored by wired TankRadar Rex level gauges from Emerson Process Management. On the other tanks, a non-Emerson gauging system sometimes had communication problems and gave incorrect readings due to cable damage. In addition, support personnel were not always available when needed.

Tüpras first considered replacing the system with wired TankRadar Rex level gauges, but because the tanks are spread over a large area and the existing cabling and junction boxes were not up to standard, the use of wireless technology was appealing. As a result the refinery placed an order with Emerson for a tank gauging system that includes 85 wireless TankRadar Rex radar level gauges. This system will provide accurate and reliable level measurement in an easy to use package.

“Ground conditions make evacuation for new cable runs difficult, but with Emerson’s Smart Wireless solution we can minimise costs for cabling, cable trenches, conduits and cable trays,” said Ali Erener, project chief engineer at the Izmir refinery. “Going wireless also gives us the flexibility to add more devices in the future – not only for level and temperature measurements, but also for tank water control and nitrogen pressure control at our blanketing tanks, which are far from the control room, as well as other applications.”

The IEC 62591 (WirelessHART) field network at the refinery will have a node for each tank, including a TankRadar Rex radar level gauge installed with an antenna unit, a Smart Wireless THUM Adapter, and a multiple spot temperature sensor to enable accurate volume calculations. Temperature and level data will be sent wirelessly to a Smart Wireless Gateway, which serves as a network manager and provides an interface to the refinery’s TankMaster inventory software or control system.

The opportunity for a bumper harvest