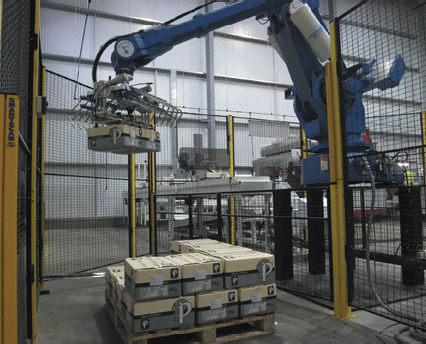 Preva Produce’s new multi-million pound premium potato packing plant in Snetterton features a Pacepacker turnkey installation which bags and palletises salad potatoes in 10-25kg sacks for the wholesale food market. The system includes a C21 sack placer which places up to 10 sacks per minute onto a filling spout, a Total Bag Control (TBC) sack closing system which supports and guides a bag throughout the closing process, and a pre-owned Blu-Robot which is capable of palletising either boxes or bags of potatoes at the new site.

The Blu-Robot has been fitted with suction cups as well as gripper arms so that it can switch between stacking sacks and boxes dependant on the product option selected from a pre-programmed list of recipes. “Within our budget constraints, we wanted a versatile robotic palletising system that would sit between a bagging line and a box packing line, which with little human intervention, would quickly switch between the two types of packing style dependent on current market demands,” said Preva Produce managing director Ian Anderson. “At half the cost of a new system, Pacepacker’s pre-owned Blu-Robot provided us with an affordable solution; we should see a return on our investment in just over three years.”

The potato grower packs 15,000 tons of salad potatoes per annum. “We had been using a third party co-packer which packed by hand, but outsourcing our packing operation in this way was cost prohibitive, provided inconsistent pack quality due to human error and didn’t give our business the flexibility and growth options that we desired,” said Anderson.?The company chose Pacepacker’s value for money line in order to achieve the quality and efficiency gains possible by bringing the packing in-house.

Typically incorporating a high quality ABB robotic arm approximately 35% of the way through its expected 100,000 operational hour lifespan, the Blu-Robot presents low production and seasonal fresh produce packers with an affordable option: “I’d defy anyone to identify that we’ve installed a pre-owned robot; it came delivered as new,” said Anderson. “…the project has given us the additional capacity that we required, credibility with customers as a company who invests in automation to achieve a superior product, and most importantly we now have total control over all aspects of production…”, he concluded.