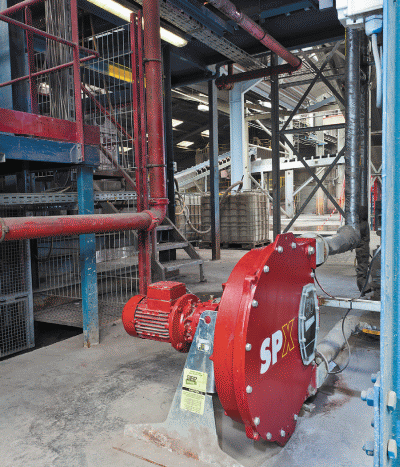 After experiencing problems with its existing peristaltic pumps, Ibstock Brick made the decision to switch to the Watson-Marlow Bredel SPX range. Such is the impression made by the Bredel pumps and the support provided by Watson-Marlow, that Ibstock Brick now has plans to add further SPX pumps in the very near future

Ibstock Brick Ltd, a UK brickmaker with a history dating back well over a century, has over the course of the past five years replaced its existing peristaltic pumps with alternative Bredel SPX models supplied by Watson-Marlow Pumps Group. The previous units were deemed of insufficient quality for this progressive manufacturing company – one that had recently upgraded to inverter-based control systems.

Located 11km west of Newcastle-upon-Tyne, Ibstock Brick can be found in the village of Throckley – best known as a calling point for Hadrian’s Wall. However, in an attempt to remove barriers against productivity and performance inside the factory, Engineering Manager Gavin Van Der Merwe knew the company’s peristaltic pumps required replacing.

“I’ll just say that the quality of certain aspects of the pumps wasn’t good enough,” he stated. “We needed to install high quality positive displacement pumps with constant flow capabilities and it became apparent that Watson-Marlow’s Bredel SPX range was the ideal solution.” 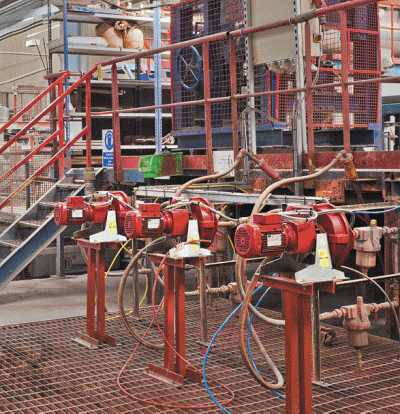 The pumps at Ibstock Brick work 12 hours a day, and the first application up for review was to pump mains water into a mixing process.

“Here, a constant volume and constant flow are vital for process success: too soft and the mixture collapses; too hard and it becomes difficult to cut,” said Mr Van Der Merwe. “The Bredel SPX50 high pressure hose pump offered a perfect option linked with PLC control and HMI output.”

The Bredel SPX50 provides a maximum continuous flow rate of 10,500 litres per hour. What’s more, the unique direct-coupled design of the Bredel SPX provides all the performance, reliability and ease of maintenance benefits of bare-shaft (long-coupled) designs with the compact advantages of close-coupled pumps in sizes ranging from 10 to 100mm.

The success of the initial project led Ibstock to review other processes. For instance, the company has since installed smaller Bredel SPX models for pumping water-based paint into the mixture which alters brick colour. Another more recent project has seen Bredel models applied to pumping abrasive magnesium-based additives and barium carbonate solutions into the clay before it’s extruded into the brick shape. The precise function of these additives is closely guarded – suffice to say they prevent certain negative things happening to the bricks in the field.

“I have to say that all of our Bredel SPX pumps are working beautifully,” said Mr Van Der Merwe. “Furthermore, in all the years we’ve had them I can only recall one maintenance job – replacing the elements within the SPX50. And this only took 40 minutes.”

Ibstock Brick today has one Bredel SPX50 and one SPX25 high pressure hose pump, along with four SPX15 mini hose pumps at its Throckley plant, where 42 people help manufacture several million bricks every year – well into eight figures. Such is the impression made by the Bredel pumps and the support provided by Watson-Marlow that Ibstock now has further plans to add further SPX50 and SPX15 pumps in the very near future. 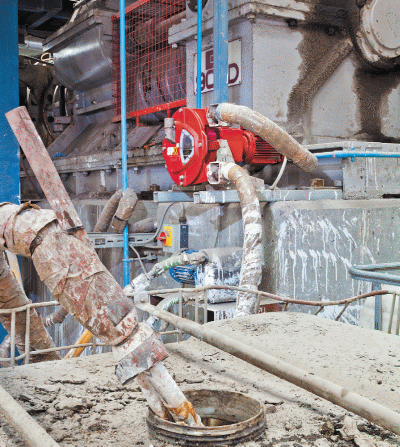 Frequently, fluids contain not only corrosive, but also abrasive material. Here, peristaltic pumps stand up well to the challenge as they contain no valves, seals or glands and have no mechanical parts in the product stream. The fluid only contacts the inside of a hose or tube element, which is a low cost, low maintenance and easily serviceable component.

In contrast with peristaltic pumps, abrasion takes a toll on other PD pumps. Abrasive fluids cause erosion or clogging of valves in diaphragm pumps, while the same effect in progressive cavity pumps widens clearances between the rotor and stator, causing internal slip.

The advantages peristaltic pumps offer mean they represent a rapidly growing percentage of the PD pump market – Watson-Marlow has now sold over a million peristaltic pumps worldwide. Plant managers tasked with reducing pump life cycle costs are increasingly embracing the functionality and benefits of peristaltic pumps, which are fast becoming first choice for all chemically aggressive and abrasive applications.

Pump is a good egg in an arduous application