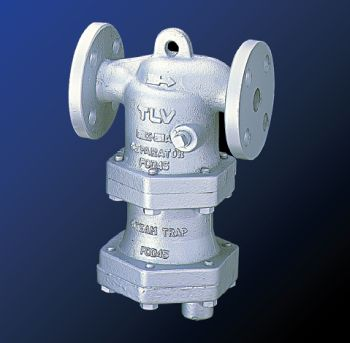 Steam separators are used on steam transport piping and at the inlet of steam-using equipment to discharge condensate and the fine mist formed by water droplets.

TLV Euro Engineering’s DC3S separator with built-in steam trap achieves 98% condensate separation efficiency which produces a noticeable improvement in the quality of steam and its heat conductivity by supplying dry steam to the process.

This can lead to increased valve life as well as increasing the service life and performance of downstream equipment and improving product quality. Dry steam also increases heating efficiency which eliminates uneven heating and reduces the amount of steam used by the process.

The DC3S separates condensate and water droplets using TLV’s patented cyclone-effects separator system which rotates the steam using a complex series of fins to change the flow into a high-speed cyclone flow and create a centrifugal force.

Once the separated condensate accumulates at the bottom of the separator, it is continuously discharged via a self-modulating free-float steam trap (another TLV patented system) which prevents it from reaching the secondary side of the separator.