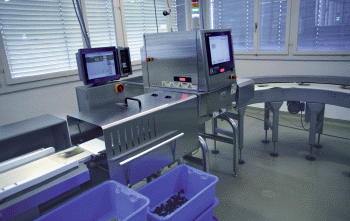 Maximum quality control in the packing of pastilles and powdered drinks into bags at its factory in Dietikon near Zurich is a priority for leading Swiss confectionery firm F. Hunziker & Co. AG and as such the company has recently installed Ishida’s advanced IX-EA-2161 X-ray inspection system along with a DACS-W-012 checkweigher to ensure products are contaminant-free.

Typical production anomalies and contaminants that the Ishida X-ray system has to monitor include an over-large sugar crystal or a simple product lump in the powdered drinks and the occasional small fragment of paper or plastic which could enter the pastilles or drinks via the sugar supply. The ability of the IX-EA to pick up tiny amounts of metal, glass, stone and rubber has added an extra level of product safety to the process.

With the line running at up to 90 bags per minute, older measures such as sieving of the powder and visual inspection of both products could not be relied on, leading Hunziker to choose X-ray inspection technology. The main challenge in inspecting the pastilles which consist mainly of gum Arabic and sugar or sugar substitutes is their density and the fact that pieces often aggregate in the pack.

The Ishida X-ray system was selected by Hunziker following extensive trials in which the machine was 100% successful in identifying a number of deliberately contaminated packs and this rate has continued during operation in the factory.

“All the challenges are easily met by the Ishida X-ray system,” comments factory manager Reto Reinli. “It detects contaminants or agglomerated product very reliably. The size of the smallest contaminant detected to date was just 0.5mm; this is despite the use of aluminised bags on this line.”

Operation of the IX-EA is very quick and simple. Inspection settings are automatically optimised by simply passing product through the machine. Up to 100 product presets are available, and the operator can change from one to another without interrupting the existing production run. The system uses the familiar Microsoft Windows platform via a touchscreen monitor.

“User-friendliness and interface are first class,” comments Hunziker’s production manager Manuel Jüttner. “The use of a graphic outline makes it easy to see why a pack is being rejected. We were able to get on with production right from the start.”

“Our operators on the lines have limited technical understanding, but they had nevertheless been able to operate the machine after a short training,” says Reinli.

Triple lead-filled plastic curtains ensure that no measurable amount of radiation can escape from the machine. If the access door is opened or a hand is inserted into the interior, the system shuts down automatically.

The Ishida machines were supplied by ITECH AG, Ishida’s distributor in Switzerland. The IX-EA-2161 underwent on-site technical approval by the authorities and two Hunziker employees who received training in local environment monitoring (compulsory under Swiss law) carry out regular checks.

“Most of the ‘red tape’ was taken care of on our behalf by Ishida and ITECH,” comments Jüttner.

“The high safety standard has had a positive influence on certification audits and has resulted in very high marks for contaminant detection,” concludes Reinli. “In the future, even on lines without metallised packaging, we will invest exclusively in X-ray detection technology.”

The 5 key questions everyone should ask to make their food factories more profitable….but rarely do…

Five questions you shouldn’t be afraid to ask