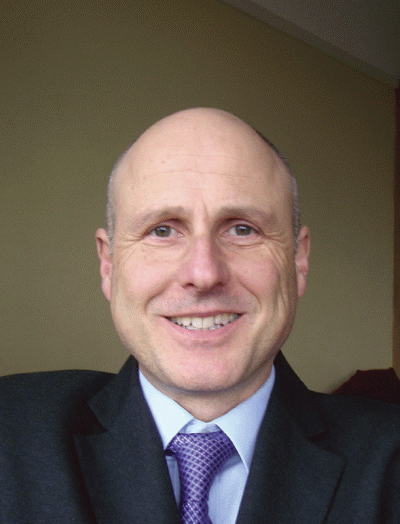 There are several techniques you can employ to ensure that you are getting maximum efficiency and performance from your pumps. Andy Cruse of ERIKS explains how to specify and maintain your pumps in order to make significant savings in long term operating costs

The purchase price of a typical pump, plus the cost of maintenance, generally equates to 13% of the total life cost; the remaining 87% is swallowed up by energy consumption. This means there is considerable potential to make big savings in long term operating costs by maximising the efficiency of each pump.

The first thing to consider is to make sure that the pump is correctly specified for the demands of the job. When evaluating existing systems it is not unusual to find pumps that are far larger than necessary. These large pumps were often fitted because it was considered best practice, or because it was thought better to install a larger pump to cope with possible peak surges in demand than a smaller pump that might run for too long at maximum capacity. This may once have been true, but modern pumps are designed to be run at high speed for long periods without failure; they can actually be more energy efficient at higher speeds, especially if variable speed drives are fitted.

Similarly, it is worth bearing in mind that older pumps may exhibit wear characteristics that increase energy consumption, especially if maintenance is not carried out correctly. In extreme circumstances, they may have become so energy inefficient that it is a false economy to keep them running. 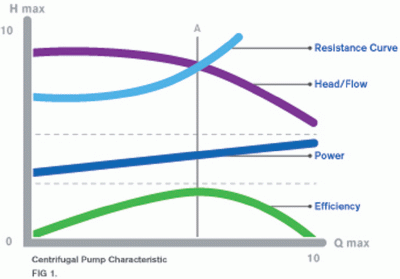 Having established that your system is correctly specified and fit to be optimised, you then need to calculate its point of optimum efficiency. This can be calculated by plotting data on pump performance into a chart such as Graph 1 below.

The two curves plotted at the top of Graph 1 describe the Head/Flow and Resistance of a centrifugal pump and the intersection of these two curves marks the optimum efficiency point of the system. The Head/Flow curve shows how flow increases as head decreases. The Resistance curve represents the actual head and flow potential of a given pumping system, which depends on the frictional characteristics of the pipework, as well as the velocity, distance and height to be pumped. The curve line on the graph can steepen or lessen when, for example, valves are closed or open, although where this line intersects the head/flow curve, this represents actual performance of the pump on-site.

Beneath these two curves, the line on Graph 1 labelled ‘Power’ shows that this centrifugal pump displays a rising power rate, which tell us that there is a risk of overloading if the motor is run at a level measured to the right of the vertical line A. The final curve represents Efficiency, its peak at the vertical line A showing where the pump is most efficient – the Best Efficiency Point (BEP). The fact that this curve peaks in a narrow area tells us that there is a limited point at which this pump can function at optimum efficiency. Operating the pump outside this optimum point will shorten its lifespan and result in frequent failures.

The dangers of failing to run your pump at its BEP are illustrated by Graph 2, which plots the many faults that can be triggered by either high head and low flow or vice versa. For example, operating too far to the left of the curve can reduce impeller life, while operating too far to the right runs the risk of motor overload. Striking the right balance between head and flow will provide the best efficiency for pumps. 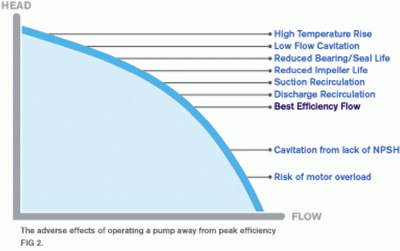 Particle contamination and poor water quality can also have an adverse effect on pump performance, causing wear and corrosion. For example, wear to the neck rings leads to an increase in clearance, resulting in leakage and recirculation from the high pressure area of the pump casing back to the suction side of the impeller. Wear and corrosion can not only reduce head and flow but also shorten the lifespan of bearings and seals, adding maintenance costs to the losses incurred by reduced pump performance.

To make sure you are running your pump at its best level of efficiency, follow a clear action plan and implement a scheduled condition monitoring and maintenance regime, either independently or in association with a trusted and experienced supplier.