Where is inefficiency hiding? 6 Places to look 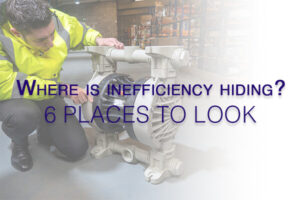 The last 6 months have seen a wrath of unprecedented increases. Materials, Energy, Fuel, Raw materials and tax have in some cases been close to 3 times their cost in the past 12 months.

When the rises are in conjunction with labour and material shortages with growing worldwide uncertainty, there has never been a more important time to revaluate your process, see where processes can be improved, eliminate wastage, automate tasks, or generally do more done with less as a way to improve your bottom line and gain control of those elements within your grasp.

Inefficiency can hide in a number of places not always immediately apparent.

Here are 6 places where inefficiency can be hiding:

Bulk Fluid Container Utilisation
Fluids, chemicals, flavorings or staples such as butter used as ingredients within processes are not always easy to decant from tubs, 205L drums, or IBCs due to their characteristics namely their viscosity.

Quite often containers can be returned to suppliers, partially filled with as much as 5-10% of liquid remaining within it, usually stuck to the sides of drums, or at the bottom of IBC’s which can be recovered providing the right pump technology is Invested in, with fluid recovery rates between 97-99%.

Quite often it is not only the amount of liquid which is extracted from a container which is important but how the liquid is handled and how accurately measures are dispensed.

Consistency of Results
Some materials are shear sensitive meaning they are sensitive in the way they are handled or transferred.

If agitated too much fats can separate out from the liquid or mixtures change in consistency from what is expected. This can often lead to batches being rejected or inconsistent final recipes increasing wastage.

Having a pump which can accurately dispense fluids repeatedly at the touch of a button ensures whatever recipe is created, it is the same every time.

Manual Handling
Manual handling is often used during the initial stages of trialing a new process or method.

When a new process, technique, additive, or mixture is created, it is sometimes necessary for personnel to manually test it, refining procedures until they work as desired.

But what if this new process creates an unforeseen issue and not reviewed after implementation?

Manual handling is often a process where users see the most benefit from automating by reducing risk of spillage, accidents, inconsistency of results and increase speed of dispensing.

Maintenance
Frequent spare part usage can often be a sign that something is not quite right within a process. Sometimes it can be taken as a given, that Mechanical Seals, O Rings, Stators, Diaphragms or Peristaltic Pump hose failure are a cost of the process. By undertaking failure analysis with a trusted pump supplier insight can be obtained if the rate of failure is normal and is as expected.

Sometimes small changes may be required such as the changing of a packed gland seal to a mechanical seal to help recover any fluid lost which is not charged for. On other occasions it could be that the pump type needs altering.

If Pump cleaning is performed manually, automating it for cleaning via CIP, or changing to a low maintenance pump design can accelerate the speed in which colour, recipe or production changes are carried out reducing downtime.

Should a pump be operating for over 10 hours a day its energy efficiency rating should be checked as older motors are rated as IE1 which can be between 5-20% less efficient than premium efficiency IE3 or IE4 motors.

Pump age can also play a part in improving results, where newer more efficient designs are available for applications. Often the greatest cost of ownership derive from maintaining and running the unit, so it often pays to upgrade should the unit be several years old.

System Calibration / Set Up
Pumps are not intelligent by design. Their performance is typically controlled via the system, which can often mean pumps are controlled by the closing of valves to reduce or stop flow, or recirculate flow.

Although the flow of a pump may have stopped, its power consumption remains the same, and if stopped abruptly or ran against a closed valve there is the potential for damage to be incurred.

By utilising a variable speed drive it reduce energy usage by more than 50%, with associated savings made in spare part usage and maintenance too.

Pump Set up & type
As pumps are controlled by the system they are installed in, there are certain telltale signs that equipment is not working as it should. It could sound excessively noisy, be vibrating heavily, or produce less flow than normal.

Having a pump operating at full speed only within a process – in particular cooling applications is worth investigating to see if the pump and process could operate at a variable rate.

Similarly if a pump is frequently operating with a relief valve open this is a sign that the pump set up can be optimized.

When these are used the energy within the liquid is dissipated and wasted within the valve. If pressure reducing valves are used frequently in plants operating 24/7 there are possibilities to recover this energy via a Pump as Turbine which recovers the energy as reducing the pressure.

If you are looking a ways to improve a process, minimize wastage, improve productivity or downtime, speak to North Ridge Pumps on 01773 302 660, via Live Chat, or email sales@northridgepumps.com to discuss your process and see how we can help.

Tapflo. All about your flow

Why use Piston Pumps as your Food processing Pumps